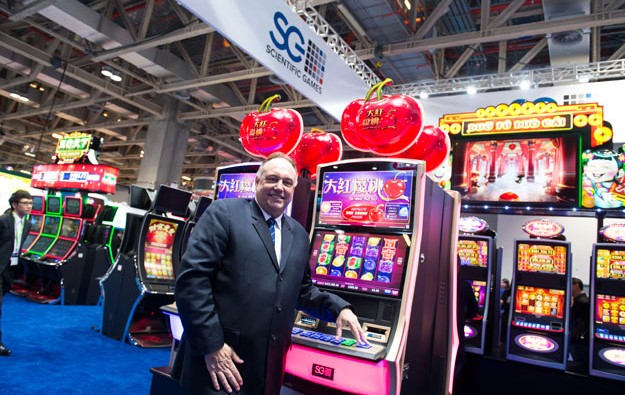 “We are gaining a larger market share with each order because we have a wider offer of games, with a great performance record,” Mr Jolly told GGRAsia on the sidelines of the Global Gaming Expo (G2E) Asia 2017. “Operators are much more comfortable in putting a larger number of our machines on the floor,” he said.

“The slot market is strong for us and continues to grow,” said Mr Jolly. “In Asia, we had a lot of success over the last four years with Duo Fu Duo Cai… and it is still selling well, after fours years,” he added.

“It’s a fruit symbol game. Fruit symbols typically haven’t been strong in the Asian market but the features we built into this game are very prominent and we are expecting some good feedback,” said the Scientific Games executive.

“Scientific Games has brought out a lot of link products and we very successful in that area,” noted Mr Jolly. “People are very positive about our products because we have proven now that we have got the right formulas for jackpot machines and we continue to bring that formula in different formats and styles.”

The company also displayed electronic table systems at G2E Asia, including “Baccarat on the Fusion Virtual Multigame” and “Roulette and Sic Bo on the Fusion Hybrid”.

“We are getting some traction now in the Macau market. Outside of Macau we are very strong, in [South] Korea, Singapore and Cambodia,” said Mr Jolly.

Scientific Games also highlighted at G2E Asia its suite of slot and casino-management systems, including new offerings for the Asian market. These include the Chinese-language version of the Elite Bonusing Suite, a group of 12 applications that enable floor wide bonuses, promotions, tournaments, virtual-racing events, dynamic random bonusing, flexible rewards and video poker bonusing, among other features.

The manufacturer also displayed its innovations in shufflers, chip sorters and other table utility products.

“ShuffleStar” shuffles anywhere between four and eight decks continuously and features a high-speed flat-dealing shoe and sophisticated card recognition using two cameras. “Safe Shoe” is an intelligent shoe with advanced technology and a compact design, featuring card-stop security to prevent dealer errors related to overdrawing or underdrawing the cards, according to the company.

Some Macau casinos visited by GGRAsia on Thursday, actually had tables that were closed, notwithstanding strong consumer demand during Chinese New Year (CNY). The reasons for some tables being... END_OF_DOCUMENT_TOKEN_TO_BE_REPLACED