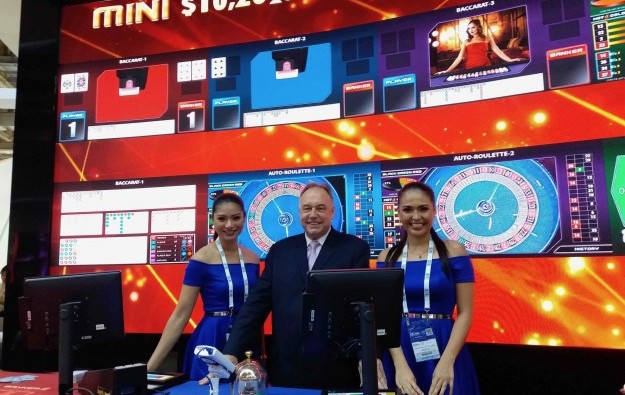 The firm described it in a pre-show press release as “a fully-immersive experience that uses eye-catching visuals and music, combined with lighting technology, to attract and engage customers”.

Also making their debut in Asia at the trade event were Scientific Games’ Stadium Casino War and Stadium Three Card Poker. They respectively add popular table games to the stadium game setup. The latter features multiple player terminals served – depending on the market – either by virtual games or live-dealer games.

“It adds to the product line-up we have on the traditional Fusion Hybrid live and virtual, where you have roulette, sic bo and baccarat,” explained Ken Jolly (also pictured, centre), Scientific Games’ vice president and managing director of Asia in comments to GGRAsia during the event.

“So now we have other games that are proprietary to the company coming into that platform,” he added.

“As always, with our multi-station terminals we have done a lot of work in that area in the last 12 months,” the casino technology boss explained.

Products smaller in scale but key to Scientific Games’ efforts in Asia Pacific are the group’s slot machine products.

“This year we have a number of new slot themes,” Mr Jolly said.

“The new ‘Jin Ji Bao Xi’ link is getting exceptional results. We actually launched it [to the market] in December, and started rolling it out in January-February to some of the venues in Macau.”

“We now have it in the Philippines, Cambodia, Vietnam, and there are orders on the books right now for more of it,” stated the executive.

“It’s a follow-on from ‘Da Fu Da Gui’ which we released five years ago now, and it’s still very successful in the market,” said Mr Jolly. The Chinese name of that product translates as “Getting Rich”.

Another slot product on show was “Very Cherry” – or in romanised Chinese “Da Hong Ying Tao”, which translates as “Big Red Cherry”.

The theme is described by Scientific Games as the group’s “first non-jackpot multi-denomination game” designed to deliver to players “lots of action and frequent rewards”.

A licensed slot product, “Pink Panther”, based on the popular animation series, was also on the stand. “That’s a product for the other Asian markets outside Macau,” he noted.

The group additionally exhibited at the event its casino floor management system capabilities.

“The systems area is bigger this year,” Mr Jolly told GGRAsia. “We have all the different apps that are on all the different modules, so we can put them up on a big screen and give practical demonstrations,” he added.

It is likely that Macau will shortly have a third round of citywide centre-based Covid-19 testing in little more than a week, after the results so far of a second mass test – that was due to finish... END_OF_DOCUMENT_TOKEN_TO_BE_REPLACED