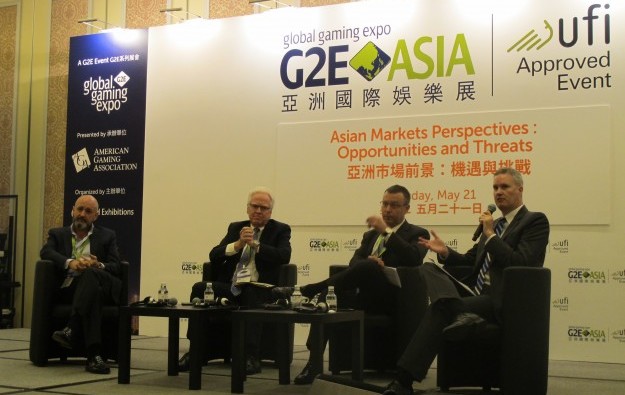 Several executives of Asian regional casino operators say they are still confident about the economics of new projects in Southeast Asia. So heard  a Tuesday panel at the Global Gaming Expo (G2E) Asia 2019 in Macau. That was notwithstanding a recent report by a brokerage that a glut of new schemes could see a diminishing of capital returns.

The Tuesday report by Union Gaming Securities Asia Ltd, stated that current rates of economic growth in Asia did not justify the US$65-billion already earmarked for new casinos in the region – two-thirds of the money for existing gaming jurisdictions, and the balance for Japan’s nascent market.

One of the authors of that report, analyst Grant Govertsen (pictured far right), played devil’s advocate when he chaired the G2E Asia discussion panel featuring executives from Hong Kong-listed regional casino operators NagaCorp Ltd, which has its main venue in Phnom Penh, Cambodia; Macau Legend Development Ltd, which runs several Macau casino resorts under a so-called service agreement with SJM Holdings Ltd and also has a casino in Laos; and Summit Ascent Holdings Ltd, which promotes the Tigre de Cristal complex near Vladivostok in the Russian Far East.

Macau Legend has interest in investing in what it terms an integrated resort in Siem Reap, Cambodia, the firm’s executive director Sheldon Trainor (far left) confirmed during the panel.

“I think the highest return [on investment] profile right now is Southeast Asia,” Mr Trainor remarked, noting that his firm’s bullish outlook on the region was due to the emerging middle class in Southeast Asia, and rising numbers of tourists originating from inside and outside the Asia-Pacific region.

Mr Trainor said, regarding the issue of potential casino oversupply in Asia-Pacific: “Regulations or the lack of those in some of these [Southeast Asian] countries is the issue.

“At the end of day, there is still political risk that you would not want to ignore,” the Macau Legend executive added.

But Mr Trainor counselled investors in the region as a whole against overreliance on junket play to support casino projects.

He told the panel: “There is a trend globally and in within Asia, that the margin you get from junket customers is declining. They [margins on VIP play] were declining in Macau for a long time,” Mr Trainor said.

The executive added: “They [junkets] made very judicious decisions to move out of Macau to capture more of that margin for themselves, or to give it back to their players in rebates.”

In Cambodia, the capital Phnom Penh is a monopoly market for NagaCorp, via its NagaWorld resort. But there has been a recent proliferation of gaming licences being issued in the coastal resort of Sihanoukville. As many as 80-plus have been mentioned by some commentators, although most of those are thought to be for so-called “gaming studios” that stream via the Internet live-dealer baccarat games to players based outside Cambodia. China is said to be the target market.

Although he noted that Macau junkets had also been interested in bricks and mortar casino projects there.  “Every junket – who operates in Macau – either owns or manages a casino there…it has actually put a material bent in Macau VIP story. Meanwhile, hasn’t touched Naga’s ability to grow at all.” The latter served “very different consumers, very different profiles,” Mr Govertsen remarked.

He added: “Naga[World] is very unique as relates to Cambodia with their exclusive licence, and all the direct investment going into Phnom Penh.”

NagaCorp has announced a US$3.5-billion expansion to the casino resort complex – also known as Naga 3 – which will add 4,720 hotel rooms and a 12-level “multi-entertainment podium”.

NagaCorp’s chairman Tim McNally (second left) told the panel audience that international-standard facilities at NagaWorld, and – for due diligence purposes as a Hong Kong-listed firm – what he termed self-regulation above and beyond what might be currently required at local level, were keys to maintaining the group’s offer to customers and investors .

Mr Govertsen of Union Gaming, suggested that – were a casino regulatory law to be introduced in Cambodia as has long been anticipated – it might even increase the value of the gaming monopoly licence that NagaWorld holds, as NagaCorp was already “compliant with AML [anti-money laundering] and certain self-regulatory” aspects.

Macau Legend’s Mr Trainor said improvements in facilities at the group’s property Savan Legend Resorts has seen improvements in margin, visitor numbers and “much higher level of in-house VIP”. Better transport links and an in-house loyalty programme had also helped, and expanded the venue’s potential pool of players beyond what he termed “Thai junkets”. In Thailand, which shares a long border with Laos, casino gambling is illegal, so many Thais go to border casinos in neighbouring countries, in order to play.

Enhancing the quality of a property and its facilities was also mentioned by Summit Ascent’s executive director Eric Landheer (second right) as in important way for an existing resort to maintain its own competitive edge and support capital returns in a market with increasing supply of casino product.

A Macau court was offered evidence on Monday, including of recordings from police-wiretapped telephone conversation, that the prosecution says proves the direct involvement of Levo Chan Weng Lin... END_OF_DOCUMENT_TOKEN_TO_BE_REPLACED