Second deadly Cotai accident in under a week 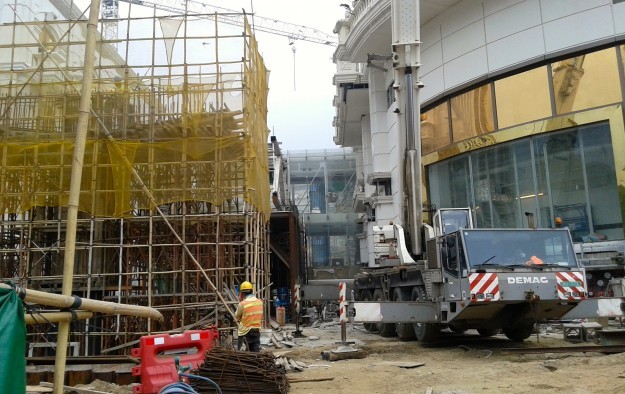 Cotai casino construction sites have suffered their third fatal accident of 2015, and the second in fewer than seven days. In the whole of 2014 there were seven construction-related deaths in Macau, according to the city’s Labour Affairs Bureau (DSAL).

The latest death was on Tuesday afternoon when a worker fell from scaffolding at the US$2.5-billion Galaxy Macau Phase 2 site (pictured in a file photo).

“As the case is currently being handled by the police, we apologise that we are unable to provide further details . . . It is regrettable to learn about the accident and we would like to express our deepest condolences to the family of the deceased,” said the site’s developer Galaxy Entertainment Group Ltd in a statement to local news outlet Macau Business Daily.

Two separate requests by GGRAsia to Galaxy Entertainment for comment had not been answered by the time this story went online.

Business Daily further reported that DSAL had ordered some suspension of works following the accident.

The news outlet quoted the Public Security Police saying the victim – a 55-year old mainland worker – had fallen 12 metres (39 feet) from scaffolding at around 4.05pm. The newspaper report added that DSAL had concluded that the worker’s safety harness had not been secured properly at the time of the incident.

A construction worker was fatally injured on Friday at the MGM Cotai casino resort building site, said the developer MGM China Holdings Ltd in a statement on Sunday.

On January 20 a worker died on a neighbouring construction site at Melco Crown Entertainment Ltd’s City of Dreams Macau property.

Both those incidents were said to have occurred when lifting gear was in use.

Macau recorded 965 “gaming-related” crimes in full-year 2022, down 29.7 percent on the 1,372 identified in the previous year, according to the latest statistics published on Tuesday by... END_OF_DOCUMENT_TOKEN_TO_BE_REPLACED