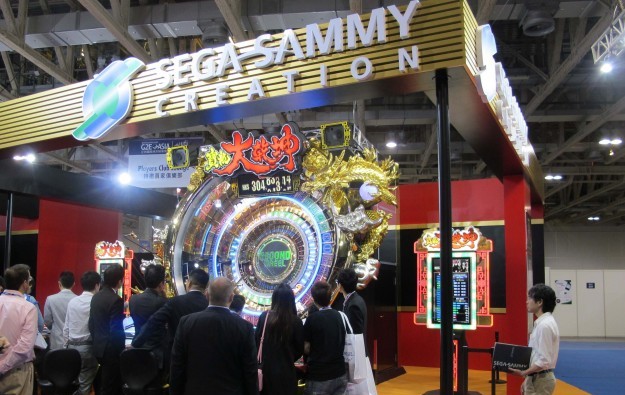 Japan’s Sega Sammy Holdings Inc is expanding to the casino space. The company is entering other markets before an expected move into the casino business in Japan, if legalised.

“This is the first time we take part in this exhibition,” said Shunsuke Nakamura, the company’s general manager for public relations.

“This is a very big first step for us, aiming for potential clients,” Mr Nakamura told GGRAsia.

Sega Sammy Creation was established in June 2013 as a gaming machine manufacturer, with a focus on large-sized products. At G2E Asia 2014, the company unveiled the Sic Bo Bonus Jackpot, with four progressive levels of jackpot.

“We would like to start entering the market with these big and mega machines, which are a bit more complex,” said Mr Nakamura. “The next step would be to introduce slot machines to the market. They will all be original products from Sega Sammy.”

The Japanese manufacturer is not worried about coming late to the market.

“Sega Sammy is a group that already has a brand value in the market, especially in consumer games and arcade games,” said the executive.

“Our strength is to provide products with design that is appealing and optimises the user interface to bring more entertainment to players,” said Mr Nakamura.

Sega Sammy Creation plans to sell to casinos in various parts of Asia, including Macau, Singapore and the Philippines, once its products are approved by regulators.

The company plans to start selling to the Asian market first, following with an expansion to the North American market. No schedule has been set. “We want to have a presence in the market as soon as possible,” he said.

The accumulated experience could prove crucial to explore the Japanese market, if it opens to casino gaming.

With the Japanese parliament debating legislation that would allow the construction of resorts with casinos, Sega Sammy Holdings is eyeing potential opportunities.

“If casinos become a reality in Japan we will use our know-how from other markets to provide original machines for the Japanese casino market,” said Mr Nakamura.

The parent company has shown interest in bidding for a casino licence in Japan, if legalised.

Sega Sammy Holdings is already investing in the casino business in South Korea, building a US$1.7 billion casino-resort in Incheon.

Macau’s casino gross gaming revenue (GGR) for the first five days of February is estimated at MOP1.9 billion (US$235.1 million) – or MOP380 million per day – a level that suggests a “45... END_OF_DOCUMENT_TOKEN_TO_BE_REPLACED