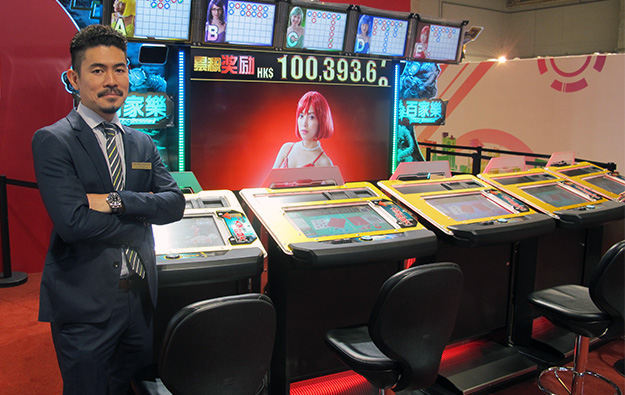 The firm expanded its footprint in Macau, with product now available in five Cotai properties, and is currently eyeing the Philippines market.

“We really had a great 2016,” Mr Maekawa (pictured) told GGRAsia during last month’s Macao Gaming Show 2016, a trade show that took place at the Venetian Macao.

He added: “Now we have to show and prove that these instalments can do well so that we can double or triple our presence in Asia… and have new instalments in every new casino that opens in Macau.”

The company installed its first Sic Bo Bonus Jackpot cabinet in the Macau market – with a total of 30 playing stations – in 2015 at the Venetian Macao, a property operated by Sands China Ltd.

“Our first machine at Venetian started off a bit slow… but it gradually caught the crowd. Sands gave us a great location, so we got a lot of attention,” Mr Maekawa said.

He added: “It started off as a game with a good occupancy rate: it was always occupied. But the bets were a bit short. Gradually, as people started to understand how the game works, we got steady [bet volume] increases month by month. After some time, the performance reached a point where [Sands China] was satisfied enough for them to actually keep it there and order an additional product for Sands Cotai Central.”

Sega Sammy Creation only has product deployed in Macau; the firm is now approaching the Philippines market. “In the coming future, you will see our product in the Philippines,” Mr Maekawa told GGRAsia.

According to the executive, Sega Sammy Creation is “not in a rush” to expand to other jurisdictions beyond Macau.

“Macau is a fascinating market, where growth is so rapid. There is no market like that elsewhere,” he said. “Singapore is limited to two casinos, and these casinos are limited to how many games they can have on their floors. [Las] Vegas is a huge market, but it is mostly replacements and the competition is crazy there. In Macau, there is always an opportunity, there is always new space for new instalments.”

Sega Sammy Creation’s portfolio only includes two products: the Sic Bo Bonus Jackpot product and the Exciting Baccarat electronic table game. The latter was introduced earlier this year and is already available in some Cotai properties.

The company is developing more products but Mr Maekawa keeps his cards close to his chest. “We are not in a rush to show something that is incomplete,” he said.

“We are taking time, but in the near future we will have a lot of new products,” Mr Maekawa added. “We have resources from the Sega Sammy Group, with a lot of experience in developing [new products]. We are in a phase of putting all of those together, to have a line-up of games that will wow the crowd.”

The Sega Sammy Group is developing a foreigner-only casino resort – called Paradise City – at Incheon, South Korea, in partnership with local casino operator Paradise Co Ltd. The first phase is due to open in April 2017.

Asked about the prospects for Sega Sammy Creation in Japan if casino gambling is authorised in the country, Mr Maekawa said the company was mainly focused on growing elsewhere.

The firm’s parent Sega Sammy Group is one of the main players in Japan’s pachinko sector.

He added: “Our stance is that gaming is more of a global, outside of Japan, market. Our focus is to do well in Macau, do well in the Philippines, maybe in Australia when we have the chance, and hopefully getting into the North America markets. Along the way, if the Japanese casinos happen, that will be great.”

The upper house of Japan’s parliament – also know as the Diet – was expected to vote on Wednesday (December 14) a bill to legalise in principle casino gambling in the country, according to media reports.

Macau casino operator Galaxy Entertainment Group Ltd said in a Wednesday statement, in response to GGRAsia’s enquiry, that “there are no gaming promoters currently operating at Galaxy... END_OF_DOCUMENT_TOKEN_TO_BE_REPLACED