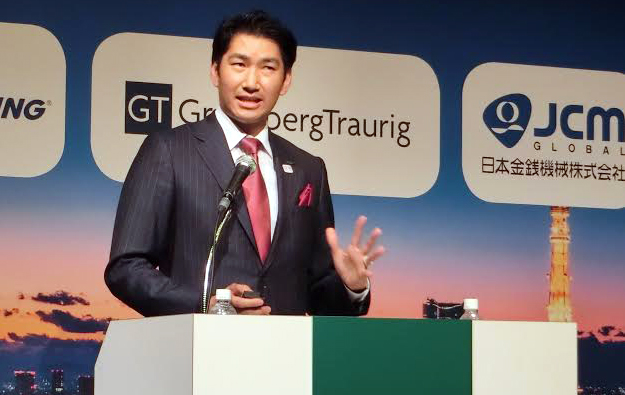 Japanese entertainment conglomerate Sega Sammy Holdings Inc is considering whether it can make an announcement “this year” regarding consortium partners for a tilt at a casino resort licence in Japan.

“We are continuing our preparations for domestic integrated resort participation,” said Haruki Satomi (pictured), Sega Sammy’s president and group chief operations officer, in commentary on its full-year results to March 31. The term integrated resort or “IR” is used in Japan to denote large-scale casino resorts with supporting tourism facilities such as hotels and conference space.

The executive added: “In terms of the future schedule for domestic IR entry, we are supposing whether it will be possible to make public announcements regarding a consortium and other details this year.”

Mr Satomi’s comments were included in a written translation into English published this week of a presentation that the company gave to investors in April, around the time it reported its results for its financial year ended March 31, 2019.

The executive further stated: “We are pursuing our preparations based on the assumption that RFP [request for proposal] presentation will begin in various regions, and the certification for each region will be given in 2020 if things go smoothly.”

He noted: “We expect that costs to create RFP will be incurred this fiscal year. We are currently moving forward based on the assumption that once an operator has been selected, matters will be settled between late 2020, if government authorisation is obtained rapidly, to the beginning of 2022.”

In the same presentation, Koichi Fukazawa, executive vice‐president and the group’s chief financial officer, also gave some commentary on the domestic casino bid.

“For the fiscal year ending March 2020, as the actions towards entering the domestic integrated resort business become active, expenses related to this will increase, so we forecast that losses will increase in some extent year on year.”

Sega Sammy Holdings is already a partner – alongside South Korean casino operator Paradise Co Ltd – in the Paradise City casino resort near South Korea’s Incheon International Airport. The gaming portion of the facility is only permitted to cater to foreigners.

The group also has a large pachinko and pachislot amusement game business in the domestic market, and has an affiliate called Sega Sammy Creation Inc focused on developing casino games. Sega Sammy Holdings has expressed ambitions to run a casino in Japan under that nation’s liberalisation move. As many as three casino resorts will be permitted at yet-to-be determined locations across the country under a first wave of liberalisation.

The conglomerate also operates the Phoenix Seagaia Resort, in Miyazaki, Japan – a property it acquired in 2012. It is not able to offer gaming, but provides the group an opportunity to gain experience on the operation of resorts, the firm has previously said in presentation materials.