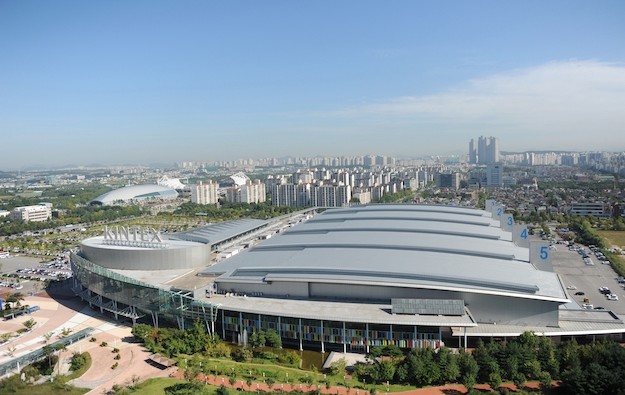 The promoter of the Korea International Exhibition and Convention Center (KINTEX), South Korea’s largest exhibition centre (pictured), is considering asking the national government for the right to site a casino at the venue, said a representative in response to GGRAsia’s telephone enquiry on Tuesday.

Currently, only one of South Korea’s casinos – Kangwon Land – is able to serve local players. The rest are foreigner-only establishments.

KINTEX is run by KINTEX Inc, a firm originally specialising in making industrial materials. The complex is in the northwest of the capital Seoul’s metropolitan area. The venue currently has two show halls, covering a total exhibition area of 108,011 square metres (1.16 million sq. feet).

According to the KINTEX Inc representative, the centre is interested in establishing a third zone at the site, and this would include the hotels and possibly a casino. The new zone would cover 293,735 sq. ms, including an extra circa 70,000 sq. ms of exhibition space, and cost approximately KRW485.3 billion (US$404.8 million) to develop.

The KINTEX Inc representative also told GGRAsia that the company had first considered in 2009 applying to add a casino, following an associated business proposal from United States-based leisure resort owner Central Florida Investments Inc, but the idea did not go forward.

The idea behind adding a casino as well as hotels, was in order to compete with Singapore’s market for meetings, incentives, conferences, and exhibitions (MICE); and with Japan’s planned integrated resort (IR) projects, that will mix gaming business with the meetings and leisure trade, said the promoter. Singapore has a casino duopoly, as well as being – from pre-pandemic times – a regional hub for meetings and events.

The proposal by KINTEX for on-site hotels and possibly a casino had undergone some form of “evaluation” process by the South Korean government in January 2020. Currently the initiative was in the “master plan” phase.

The person added that, were KINTEX’s plans to go ahead, the expo centre’s total exhibition area would be 178,566 sq. ms, making it no less than 10th largest in the Asia, and ranked about 20th among exhibition centres worldwide.