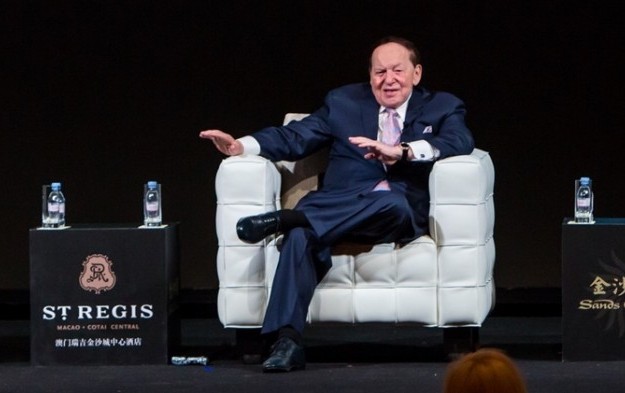 Arguably in this regard, Mr Adelson, founding chairman of Las Vegas Sands Corp and its Macau business unit, Sands China Ltd, lived up to his words.

His death was caused by complications related to his treatment for non-Hodgkin’s lymphoma, Las Vegas Sands said in a statement.

Mr Adelson entered casino-building relatively late in his business career, after selling his Comdex events business in Las Vegas, Nevada in the United States, at the top of the market.

His Venetian property in Las Vegas, which opened in 1999, was not the first themed casino resort in that U.S. gambling hub, but it was one that captured the imagination of many people around the world.

He repeated it on an even grander scale in Macau, after dipping his toe in the market with the modestly-priced Sands Macao on the city’s peninsula, after winning a Macau gaming licence in 2002.

The group opened the Venetian Macao in August 2007, as the first of the city’s new generation of Cotai resorts, with extensive facilities for meetings, incentives, conferences and exhibitions (MICE) events; shopping and entertainment, as well as the more traditional luxury hotel space associated with standard casino resorts.

The idea – often repeated since by his executives – was to get guests to stay longer in a tourism destination, and spend more. Last year, Mr Adelson turned away from the idea of repeating the trick in the newly-liberalising Japan market.

Rather like a so-called ‘anchor store’ in a shopping mall, the Venetian Macao offered an example, as well as competition, for the other Cotai resorts that sprang up subsequently from rival Macau operators.

Mr Adelson went down a different route in Singapore, after winning a casino licence there, hiring an Israeli architect to build Marina Bay Sands, a striking three-tower resort topped by a massive pool deck, which has become almost as familiar an image as Singapore’s Merlion statue.

He returned to the themed resort idea in 2016 with the launch of the Parisian Macao, complete with a scale model of the Eiffel Tower. His third themed Cotai property – the Londoner Macao, a revamp of the former Sands Cotai Central – is due to have a first-phase launch in early February, around the time of Chinese New Year.

Even during the pandemic, earnings from Mr Adelson’s Asian operations have outstripped those from Las Vegas.

“I’d say that nobody had a more accurate view of the future of the gaming industry in Macau than Mr Adelson, a vision that is as true today as it was the better part of 20 years ago,” said Grant Govertsen, a founding partner of Union Gaming Group LLC, a boutique investment bank and advisory group with a focus on the casino sector, in comments to GGRAsia.

“There are only a handful of places in Macau that are generally must-sees for visitors and his Venetian [Macao], which has stood the test of time, is certainly at or near the top despite so many newer resorts having been built around it,” added the analyst, a long-time commentator on the Macau gaming industry.

Niall Murray, a former casino executive in Las Vegas and Macau, worked for Mr Adelson at the Venetian in Las Vegas. He told GGRAsia of an encounter in late 1998 when he had to help Mr Adelson prepare a staff orientation video for new workers. Other staffers wanted to script the boss’s answers.

Mr Murray said: “After about 30 seconds, Sheldon shouted, ‘Who wrote this rubbish? Take that teleprompter away. They are not my thoughts or feelings and not what I discussed and agreed to speak about. Where is that Irish guy I talked with about this?’

The now-consultant added: “I was ushered in. Then he said ‘There you are, ask me your questions Niall, I’ll tell you what I really feel and believe from my heart’.”

Mr Adelson had his fair share of critics as a high-profile donor to the Republican Party in the U.S., and supporter of President Donald Trump. He was also known for his support of conservative causes, and of Israel.

In common with many prominent billionaires, Mr Adelson was involved in a number of high-profile court cases. His companies have also paid millions of U.S. dollars to settle regulatory probes, namely claims of violations of the U.S. Foreign Corrupt Practices Act.

In 2013, in Nevada, Bill Weidner, a former president and chief operating officer of Las Vegas Sands, gave evidence against Mr Adelson, his former boss, in a court case brought by Chinese businessman Richard Suen, who claimed he was owed money for what he said was his help in obtaining the firm’s Macau gaming licence.

In March 2019, Mr Suen and the company ended what by then was a 15-year battle, reaching a settlement for an undisclosed amount of money.

In mid-2016, Steve Jacobs, a former chief executive and former executive director of Sands China, who had been sacked in 2010, reached a “comprehensive and confidential settlement” on his claims; but not before Mr Jacobs made a number of damaging allegations about the company that found their way into the public domain.

At the time of Mr Adelson’s death, several units of Las Vegas Sands Corp were still in litigation with Asian American Entertainment Corp, a company led by Taiwan entrepreneur Marshall Hao Shi-sheng, who was seeking the equivalent of billions of U.S. dollars via the Macau courts, alleging breach of agreements during Las Vegas Sands’ successful bid in 2002 for a casino licence in Macau.