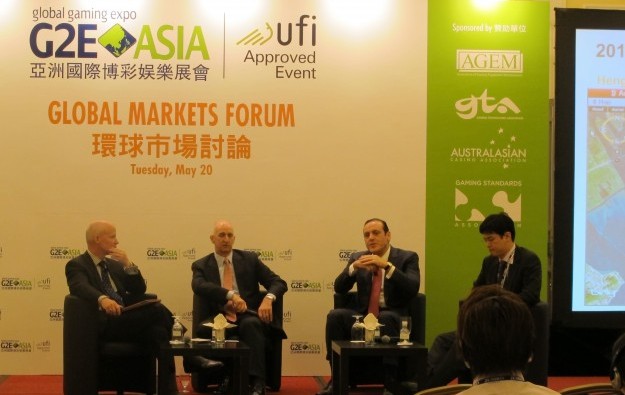 Casino operations in Macau over the last decade have been largely focused on the profits coming from VIPs, but new industry trends show that there will be more profit from focusing on the mass-market segment of gamblers.

Operators in Macau are reacting and taking on an opportunity that is now emerging, especially on the premium mass segment, says chief executive of MGM China Holdings Ltd Grant Bowie (pictured, second from left).

Mr Bowie was speaking during the opening panel of Global Gaming Expo (G2E) Asia 2014, which opened today in Macau.

“The mass market has a larger amount of energy and it is now starting to move,” said Mr Bowie.

Gaming operators are preparing to focus on the premium mass segment to lead growth this year. Premium mass-market players account for the top of the mass market, playing at higher denominations than the market average. They yield high margins because they don’t require casinos to pay commissions to junket operators.

“We are using some of the slowdown in VIP to accommodate premium mass, what we didn’t have a chance to do before,” said president of Wynn Macau Ltd Gamal Aziz (pictured, second from right). “It is net positive because it is more profitable,” he added.

Last year, the mass market accounted for 34 percent of all gross gaming revenue (GGR) in Macau, according to official data. That’s up from 31 percent in 2012.

In 2013, VIP revenue represented about two-thirds of the GGR but only 35 percent of the gaming earnings before interest, tax, depreciation and amortisation (EBITDA), data compiled by Nomura Securities Co show.

“We are reacting to the market trends. I don’t see it as the operators dictating on where the revenue should come from,” Mr Chum said.

Morgan Stanley estimates that in 2014, growth from mass-market gamblers will top 28 percent in Macau, compared to a 13 percent growth in VIP gaming.

“We are moving capacity from VIP to mass because the opportunity is emerging,” said MGM China’s chief executive. “But we are also working with our [junket] operators to see how can we help improve their operations.”

While is difficult to imagine the Macau market without the middlemen that bring the high rollers to casinos, Mr Bowie said the junket industry is now consolidating.

The premium mass, however, will be a more stable bet, said Mr Aziz. “Premium mass now is not dependent on credit and that is going to make it sustainable for the future,” he said.

The Macau gaming industry was hit last week by a string of reports on junket liquidity and a potential crackdown on unregistered mobile China UnionPay card swipe devices.

“Those are consequences of the market on which we operate,” said Mr Bowie.

The executive said policies change from time to time but not to the point where they will “fundamentally disturb the strength” of the Macau market.

“I don’t think any of these events will affect the direction Macau is heading long-term,” said Wynn Macau’s Mr Aziz.

The long-awaited new outdoor theme park at Resorts World Genting, Malaysia’s only casino resort, is impressive, but likely to be “loss-generating due to heavy depreciation”, says a Thursday... END_OF_DOCUMENT_TOKEN_TO_BE_REPLACED