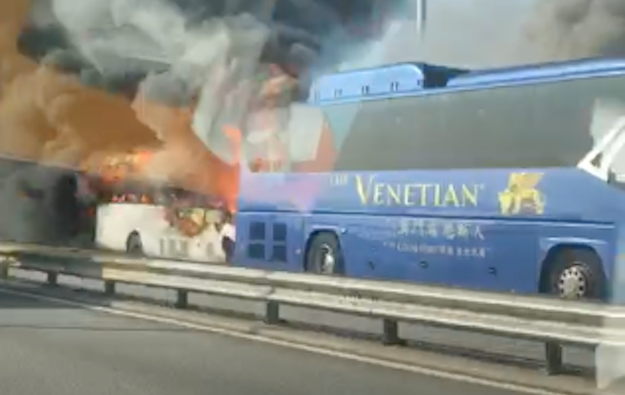 Two shuttle-type buses – one in the livery of the Venetian Macao casino resort – were involved in a collision and subsequent fire (pictured) during Friday morning on the northbound side of the Friendship Bridge heading from Taipa towards Macau peninsula.

The Fire Services Bureau told GGRAsia a report of the incident was received at 9.52am, and its officers were on the scene by circa 10am, in order to tackle a subsequent fire (pictured), that took about 20 minutes to control and eventually gutted both vehicles.

The Public Security Police (PSP) told GGRAsia the incident appeared to involve the smaller bus colliding with the rear of the larger one. The smaller bus – behind the Venetian-liveried vehicle – was occupied by a lone female driver, who escaped with some abrasions and was taken to hospital.

The PSP stated that the driver of the Venetian-liveried bus was carrying “five to six” passengers who were all evacuated without injury before the fire began. The driver said the passengers had been transferred to another vehicle in order to convey them to safety from the bridge.

The police did not confirm the entities operating the vehicles involved in the incident.

The Friendship Bridge – also known as Ponte da Amizade in Portuguese – is a four-lane structure with two lanes for northbound vehicles and two for southbound ones, and a central divider. The bridge is commonly used by casino shuttles carrying passengers between the Macau peninsula’s main border checkpoint – linking to neighbouring Zhuhai in mainland China – and the gaming resorts in the Cotai district.

Northbound traffic was suspended for a period during the incident.

Sands China Ltd, the operator of the Venetian Macao, confirmed in a statement emailed to GGRAsia on Friday afternoon – in response to our enquiry – that one of its shuttles had been involved.

It said: “Sands China confirms that, at approximately 10am this morning, a Venetian Macao shuttle bus was involved in a traffic accident at Ponte da Amizade. There were no reported injuries to anyone on board. The company is cooperating with the relevant authorities as they carry out their investigation.”

The Chinese-language radio service of local public broadcaster TDM quoted on Friday the city’s Transport Bureau as saying both vehicles involved in that day’s incident had in 2019 passed mechanical inspections conducted by the bureau. TDM added that the bureau was also conducting checks on the relevant professional qualifications of the two drivers involved in the incident.