Silver Heritage 2016 loss below forecast due to Nepal 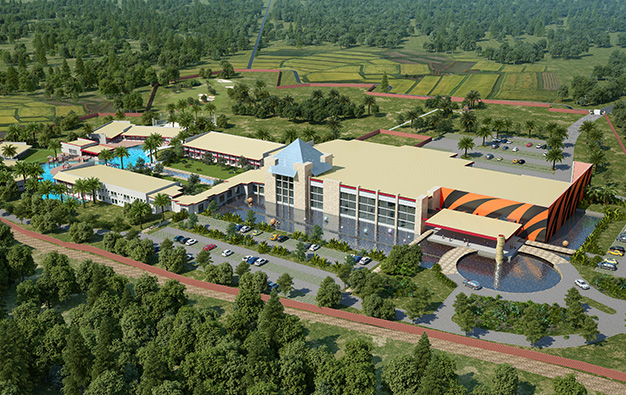 Asian casino operator and developer Silver Heritage Group Ltd saw its net loss widen in the 12 months to December 31. The unaudited loss attributable to the owners of the company was US$4.58 million for 2016, compared to an equivalent loss of US$4.24 million in the prior year.

But the firm said that the prospectus for its August initial public offering had actually anticipated the annual loss would be US$5.32 million, i.e., 14 percent higher than the actual figure recorded.

The difference was due to “less expenses being incurred in setting up the operations of Tiger Palace Resort Bhairahawa in financial year 2016 than were anticipated at the time the prospectus was prepared,” said the group.

That was a reference to a casino resort (pictured in an artist’s rendering) being developed by the company on Nepal’s border with India.

“Some of the costs associated with setting up operations, including staff training costs and marketing, were deferred until early financial year 2017,” stated Silver Heritage in a Wednesday filing to the Australian Securities Exchange.

Unanticipated delays to the Nepal project could mean a later opening date and higher costs, the company had said in a Monday filing.

According to Wednesday’s filing, during the course of the reporting period the firm had gaming operations in Vietnam – on a shared venue basis; in Cambodia and Laos – for electronic gaming machines; and in Nepal – at its own venue in the capital Kathmandu; plus the Pacific island of Tinian in the Commonwealth of the Northern Mariana Islands, a U.S. jurisdiction, where it also operates electronic gaming.

In October, Silver Heritage announced it was assigning its revenue sharing agreements to manage electronic gaming machines at the Dansavanh Nam Ngum Resort and Casino in Laos, to a third party, for a consideration of US$500,000.

The group had cash on hand amounting to US$16.93 million as of December 31.

On Monday, Silver Heritage announced it had voluntarily requested – and had subsequently been granted – a suspension “with immediate effect” in the trading of its stock, due to “unexpected delays” in the completion of Tiger Palace Resort Bhairahawa.

The venue is close to Nepal’s border with the Indian state of Uttar Pradesh, which does not offer legal casino gambling.

According to media reports, at Bhairahawa itself, the Civil Aviation Authority of Nepal has commissioned a NPR6-billion (US$56.1-million) upgrade to Gautam Buddha Airport, which serves the Buddhist pilgrimage site of Lumbini nearby.

The first phase of the revamp is reportedly due to be completed by June 2018, and will lengthen the runway to 3,000 metres (9,843 feet). The first phase will include an international terminal with a capacity to handle 400 passengers per hour.

Silver Heritage noted in its annual results filing that current gaming operations had started 2017 with “good momentum”. GGR at the Phoenix International Club near Hanoi in Vietnam, was up 20 percent year-on-year, after the first 58 days of the new calendar year, although equivalent revenue at The Millionaire’s Club and Casino in Kathmandu, Nepal, was down 5 percent compared to the prior-year period.

A casino cruise brand reportedly controlled by Malaysian entrepreneur Lim Kok Thay is to launch services from Singapore fewer than five months after the Lim family-founded Dream Cruises brand of the... END_OF_DOCUMENT_TOKEN_TO_BE_REPLACED