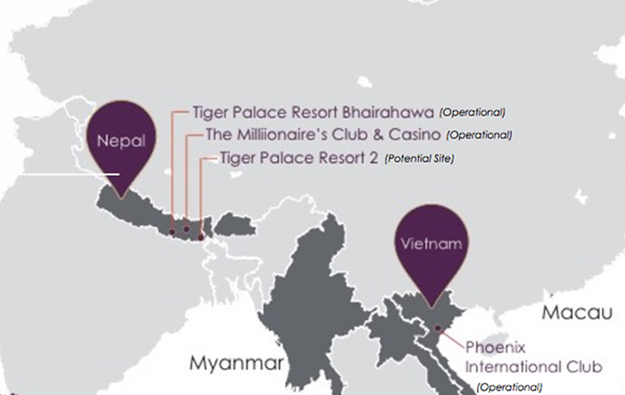 The promoter of a purpose-built casino resort in Nepal due to launch gaming operations on November 30, hinted in a graphic contained in a business update that it had identified another site in Nepal for a potential second new resort. According to the graphic (pictured), the second site would be further east, near Nepal’s border with the Indian states of Bihar and Sikkim, and a relatively short distance from India’s contiguous border with Bangladesh. The update gave no further details.

But the firm’s business bulletin – filed with the Australian Securities Exchange on Thursday – did give some information on the marketing and branding strategies for Tiger Palace Resort Bhairahawa, the Nepal property it is the process of launching. A soft opening of the hotel facilities, offering 100 rooms, was held on September 20. The scheme has a budget of US$51.8 million.

The marketing push includes the use of a resort app for digital communications.

The new venue is near Nepal’s border with the Indian state of Uttar Pradesh, one of that country’s wealthiest measured by gross domestic product, and which does not offer legal casino gambling. The venue’s promoters have stated Indian customers will be a key target group.

The Tiger Palace mobile app is said to offer up-to-date information and room bookings for the resort, and “real time rewards programme data including player level, current points and bar-coded identification”. For the resort operator, the app is said to offer a channel for targeted communication to customers, including redeemable offers to players.

The firm says the app enables its customers at other company venues to take advantage of cross-property promotions. Silver Heritage already runs the Millionaire’s Club and Casino in Kathmandu, Nepal’s capital, and the Phoenix International Club, near Hanoi, in Vietnam. The firm says its Kathmandu venue has a 30,000-strong membership base.

The firm said it had also struck a deal with an Indian licensed operator of online rummy card games to carry the Tiger Palace brand. Rummy – via its local variant Indian rummy – is one of the most popular card games on the Indian sub-continent.

Macau’s casino gross gaming revenue (GGR) for the first five days of February is estimated at MOP1.9 billion (US$235.1 million) – or MOP380 million per day – a level that suggests a “45... END_OF_DOCUMENT_TOKEN_TO_BE_REPLACED