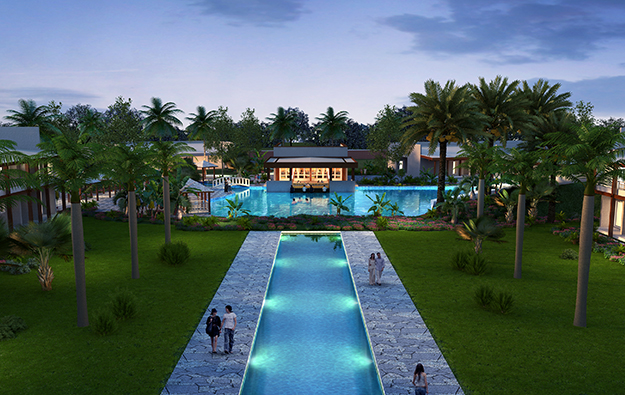 Asian casino operator and developer Silver Heritage Group Ltd says it is finalising details of the capital-raising exercise to complete construction of its new Nepal casino resort. The company anticipates making an announcement “within approximately three weeks,” Silver Heritage said on Tuesday in a filing to the Australian Securities Exchange.

Silver Heritage has increased by one-third the budget for Tiger Palace Resort Bhairahawa (pictured in an artist’s rendering), a scheme being built near Nepal’s border with India. The firm said in March that it would need to raise US$14.8 million in new capital to complete the project, including US$1 million as working capital.

In Tuesday’s filing, Silver Heritage said it is in discussions with equity providers, brokers and holders of its senior secured bonds regarding the capital raising. “The company intends that the capital to be raised will fully fund the completion of Tiger Palace, enabling the opening of the hotel and casino within the revised time frame,” it said.

The firm has pushed back the completion timetable for the project to later in 2017. The firm said in March that the opening of Tiger Palace would be done in stages, with the hotel operative from August 2017, followed by a “grand opening in November 2017” for the resort and casino.

The company’s shares will remain in voluntary suspension on the Australian Securities Exchange until the details of the capital raising are announced, added Tuesday’s filing.

Most of Macau’s casino operators are likely to generate positive free cash flow in the first quarter, given the robust recovery level of mass-market gross gaming revenue (GGR) in January, relative... END_OF_DOCUMENT_TOKEN_TO_BE_REPLACED