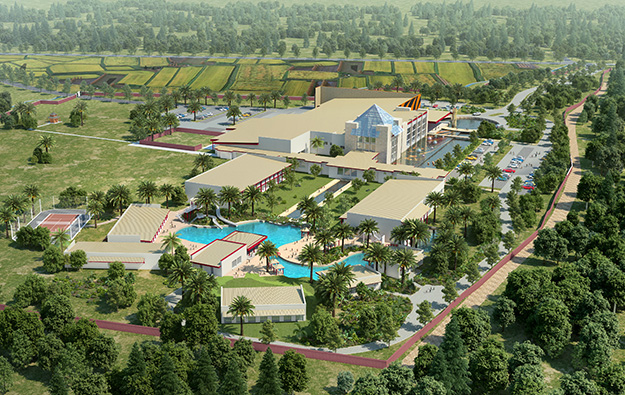 Asian casino operator and developer Silver Heritage Group Ltd says it is still working on finding the “preferred solution” to raise the needed capital to complete construction of its new Nepal casino resort.

“We are not quite there with a finalised funding solution, but are well advanced on several [alternatives] and our objective is to announce the preferred solution shortly,” said Mike Bolsover, the group’s chief executive, in a speech at the firm’s annual general meeting on Thursday.

Silver Heritage has increased by one-third the budget for Tiger Palace Resort Bhairahawa (pictured in an artist’s rendering), a scheme being built near Nepal’s border with India. The firm said in March that it would need to raise US$13.8 million in new capital to complete the project, as well as an additional US$1 million as working capital.

The firm has also pushed back the completion timetable for the project to later in 2017.

Mr Bolsover said on Thursday that the company has identified a variety of alternatives to raise capital, including: debt from new providers; equity investment from new investors; new equity investment from existing shareholders though an entitlement offer; an increase of the debt facilities provided by its existing debt provider; or a combination of some of these alternatives.

“The challenge will then be to complete the exercise and deliver the funds in a timely manner to complete construction to the revised schedule and to open the hospitality and hotel public areas in August 2017, and the casino in November 2017,” added Mr Bolsover.

Silver Heritage’s CEO additionally said the firm has had “a strong start to trading in 2017”. The Australia-listed company generated first-quarter revenue of nearly US$3.97 million, it said in a filing earlier this month.

The group – which runs casinos in Vietnam and Nepal – also reported quarterly adjusted earnings before interest, taxation, depreciation and amortisation (EBITDA) amounting to US$654,000.

On Thursday, Mr Bolsover said the firm would continue working to deliver “a completed world class asset” within the revised schedule and budget. The executive added that other developments happening around the under-construction resort would help Tiger Palace in the future.

“Great progress has been made in the upgrading of the proximate road infrastructure from India to Kathmandu – including a six lane highway directly past the resort – as well as significant airlift facilities due to complete over the next 15 months,” said Mr Bolsover.

The trading of Silver Heritage’s shares on the Australian Securities Exchange has been suspended since February 27.

Commenting on the suspension, David Green, chairman of Silver Heritage, said on Thursday: “We are conscious of the protracted period of suspension of the company’s shares and the implication of such a lengthy suspension. That said, we are not yet ready to request a resumption of trading. We will do so only when the board is satisfied that we have identified the best available financing options, and are in a position to announce it to the market.”

Mr Green also stated that the capital-raising process “has been demanding”. “It is undeniable that our credibility has been an issue, given the substantial increase in the aggregate budgeted cost of the Tiger Palace project, and the anticipated delay in completion,” said the executive.

“However, I believe that we are close to completing negotiations for a financing package which will fully fund the project to completion and responsibly and fairly respects the interests of our existing shareholders,” he added.

The decision by the Macau government to grant fresh 10-year licences to each of the city’s six incumbent casino operators has been welcome by top management at those firms. Each of the concessions... END_OF_DOCUMENT_TOKEN_TO_BE_REPLACED