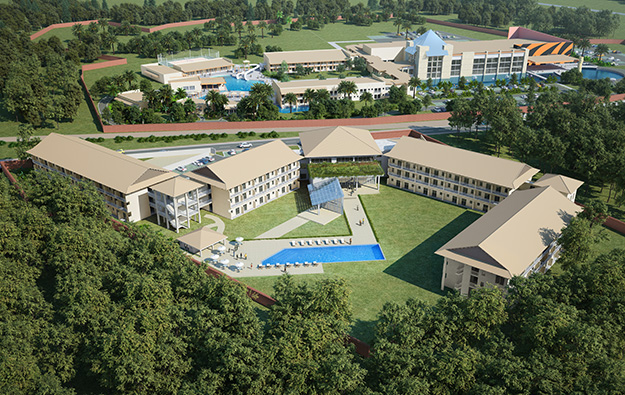 Australia-listed gaming operator Silver Heritage Group Ltd said in a filing on Wednesday that it is encountering “temporary unexpected delays” to the completion of construction of its Tiger Palace Resort Bhairahawa casino resort (pictured in a rendering).

The property is being built at a site on Nepal’s long border with India and was due to have a soft opening this month, according to previous company information.

“The revision to the opening schedule for Tiger Palace Resort Bhairahawa is due principally to both a shortage of liquidity in the Nepal banking system and unanticipated delays in the issuance of approval for Silver Heritage to increase the equity ceiling of its corporate investment vehicle in Nepal to allow remittance of capital into Nepal to fund the Tiger Palace Resort Bhairahawa construction costs,” the casino operator said in the filing to the Australian Securities Exchange.

“This has resulted in a slowdown in on-site activity, which is currently ongoing,” Silver Heritage stated, adding that the company’s board is presently “assessing the impact of the above delay on the project completion, including final project cost”.

According to previous filings, the under-construction Nepal property is to have a casino with a gross floor area of 2,471 square metres (26,600 sq feet), containing 52 tables and 200 electronic gaming machines.

The first phase of the property will have 100 rooms of five-star standard, plus two villas; a pool, spa, tennis facilities, gym, conference hall, meeting rooms, facilities for weddings, restaurants and shops.

The company had previously mentioned a price tag of US$40 million for the first phase of the scheme.

Silver Heritage has had operations in Nepal since 2012 and currently operates The Millionaire’s Club and Casino in Kathmandu. It also manages the Phoenix International Club (pictured) near Hanoi, in Vietnam. The firm began trading on the Australian Securities Exchange on August 29, following an AUD25-million (US$19.1-million) initial public offering.

In Wednesday’s filing, Silver Heritage also announced the upward revision of its earnings guidance for the fiscal year ending December 31, 2016, “given an improved trading performance in the fourth quarter”.

Macau mass-market casino gross gaming revenue (GGR) for the recent Chinese New Year (CNY) holidays could have recovered to at least 60 percent of that for the 2019 break, when the festivities were in... END_OF_DOCUMENT_TOKEN_TO_BE_REPLACED