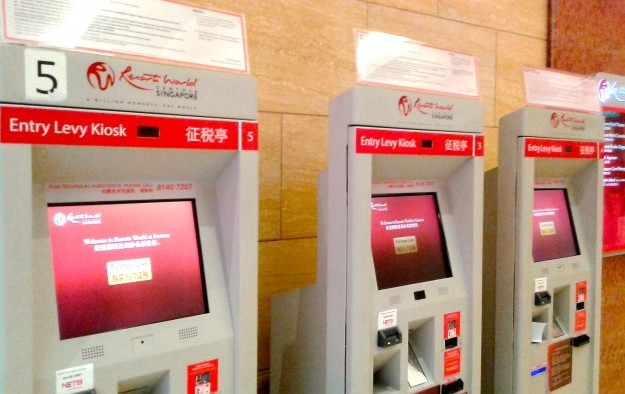 The aggregate amount of money raised from the casino entry levy in Singapore fell 7.6 percent year-on-year in the 12 months to March 31, according to the Singapore Totalisator Board, the body responsible for collecting it.

The amount raised in the reporting period was SGD134.4 million (US$99.6 million) compared to SGD145.2 million in the prior-year period, said the Tote Board on Thursday.

The entry levy – payable by Singapore citizens and permanent residents – has been at the same level since the city-state’s two casino venues – Resorts World Sentosa, operated by Genting Singapore Plc; and Marina Bay Sands, run by Las Vegas Sands Corp – opened in the first half of 2010. The entry fee is SGD100 per 24-hour period, or SGD2,000 for a one-year pass.

Data in the latest Tote Board report indicated that the annual amount collected under the levy has been falling steadily since at least financial year 2012-2013.

The Singapore government introduced – prior to the casinos opening and subsequent to their launch – a series of measures designed to reduce the risk of problem gambling, particularly among locals.

In May 2014, the authorities launched a centralised system for self-exclusion. In September that year it was announced that non-casino gaming operators in the city had joined the scheme.

Singapore also has a system whereby gamblers can limit the number of visits per month they can make to the casinos in the Lion City. The National Council on Problem Gambling can also impose a casino visit limit on individuals who are frequent gamblers and deemed to be financially vulnerable.

The news about yet another fall in the aggregate annual levy collection comes shortly after Singapore’s Casino Regulatory Authority announced that aggregate fines levied on Singapore’s two gaming resort operators by the city-state’s casino regulator showed a 60.5 percent year-on-year decline in financial year 2016, a period also covering the 12 months to March 31 this year. Grounds for imposing fines on operators include failure properly to implement the entry levy on locals.

In July, the Singapore government said it would introduce stricter rules about the availability and use of slot machines in the city-state’s social clubs.

Any clubs that do not meet a new test regarding the scope of their non-gaming amenities would be required to cease slot machine operations by April 30, 2018, said the Ministry of Home Affairs in a statement.

A casino cruise brand reportedly controlled by Malaysian entrepreneur Lim Kok Thay is to launch services from Singapore fewer than five months after the Lim family-founded Dream Cruises brand of the... END_OF_DOCUMENT_TOKEN_TO_BE_REPLACED