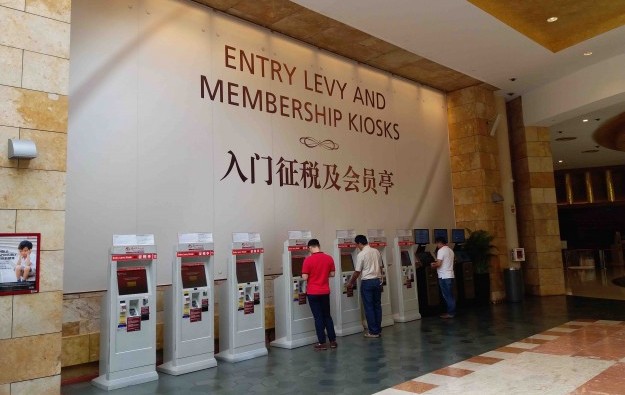 Singapore citizens and permanent residents required to pay for either a 24-hour entrance levy or a year-long pass to enter the city-state’s two casinos, might choose not to renew the latter due to the 50 percent hike in fees announced in April.

So said a Thursday note from Maybank Investment Bank Bhd.

“With such a steep hike, we gather that some” Singapore citizens and permanent residents “will not renew their annual passes when they expire, exerting downside pressure on mass-market gross gaming revenue [GGR],” wrote analyst Samuel Yin Shao Yang, of the bank’s Maybank IB Research unit.

In the Singapore casino market, “the mass market segment, in our view, is more important that the VIP one as its earnings before interest, taxation, depreciation and amortisation margin is approximately 60 percent or 2 time to 3 times that of VIP,” wrote Maybank’s Mr Yin.

As Singapore citizens and permanent residents witness the expiry of their existing SGD2,000 (US$1,467) annual passes issued prior to the April hike, they “will have to pay a much higher SGD3,000 if they wish to renew their annual passes,” noted Mr Yin.

The Singaporean authorities announced in April – at the same time as extending the casino duopoly until 2030 in exchange for an aggregate of SGD9 billion from the two operators – an increase to casino entry levies for locals, as part of its policy of “minimising the social impact of problem gambling”.

Local citizens and permanent residents of the city-state faced a 50 percent hike on the daily entrance tax, from SGD100 to SGD150, and the same percentage on the annual levy.

Some Macau casinos visited by GGRAsia on Thursday, actually had tables that were closed, notwithstanding strong consumer demand during Chinese New Year (CNY). The reasons for some tables being... END_OF_DOCUMENT_TOKEN_TO_BE_REPLACED