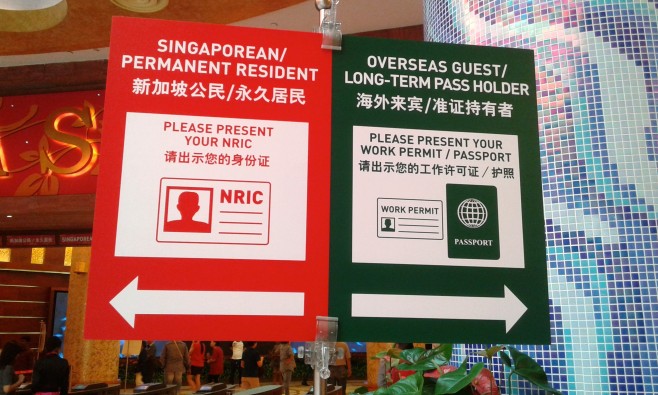 A lawmaker in Singapore has proposed increasing the casino entry levy imposed on Singapore citizens and permanent residents.

Denise Phua Lay Peng also suggested introducing an ‘opt-in’ system whereby only those Singaporeans that formally register an interest in gambling at the city-state’s two casino resorts would be allowed to do so, reported the Malay Mail.

Her comments came during debate in Singapore’s parliament on a bill to regulate remote gambling in the country. The report didn’t mention by how much she wished to see the levy increased.

The entry levy for Singaporeans has been at the same level since the two casino venues – Resorts World Sentosa, operated by Genting Singapore Plc, and Marina Bay Sands, run by Las Vegas Sands Corp – opened in the first half of 2010. The entry fee is SGD100 (US$79) per 24-hour period, or SGD2,000 for a one-year pass.

Although the levy has stayed the same, the government has introduced incremental changes to the rules governing how the casinos can market their services to local players.

The policy aim of the authorities in instituting the casino policy was to expand tax take and spending by inbound tourists, rather than to redistribute the savings of its own lower- and middle-class citizens.

Analysts have noted that the earnings of the Singapore casinos have not seen the kind of incremental rises witnessed until recently in Macau.

In the second quarter of 2014, Genting Singapore’s net profit actually fell 22 percent year-on-year, largely due to greater than expected impairment charges on receivables – mainly in the form of debt owed by VIP gamblers.

In September 2010, only months after the resorts opened, the authorities barred the casinos from running free shuttle buses from so-called ‘Heartlands’ areas of public housing.

Changes have also been made to the country’s Casino Control Act. Section 54 of the Act as amended in late 2012 says that operators can be fined up to 10 percent of annual gross gaming revenue for a “serious breach” of the Act, without defining what counts as “serious”.

In May 2013, S Iswaran, Minister in the Prime Minister’s Office and Second Minister for Home Affairs, said Singapore’s Casino Regulatory Authority had stepped up its presence on the gaming floors of the city’s two gambling resorts.

And at the end of that month, Singapore announced a system whereby individuals, or the family of vulnerable individuals, could apply to the country’s National Council on Problem Gambling to have a limit placed on their casino trips.

In November last year, it was announced that RWS and MBS had each been fined six-figure sums for entry levy offences reported or detected between May 1 to December 31, 2012.

In May this year, the government announced it had introduced a centralised system for self-exclusion. In September it was announced that non-casino gaming operators in the city had also joined the scheme.

Lawmakers in Japan – who have made frequent reference to the ‘Singapore model’ of casino regulation when debating the possibility of legalising casinos in that country – on Tuesday heard a proposal to make any Japanese casinos for foreigners-only.

A Macau court was told on Wednesday that Asian American Entertainment Corp Ltd (AAEC), led by Taiwan businessman Marshall Hao Shi-sheng, was to blame for its failed tie-up with United States-based... END_OF_DOCUMENT_TOKEN_TO_BE_REPLACED