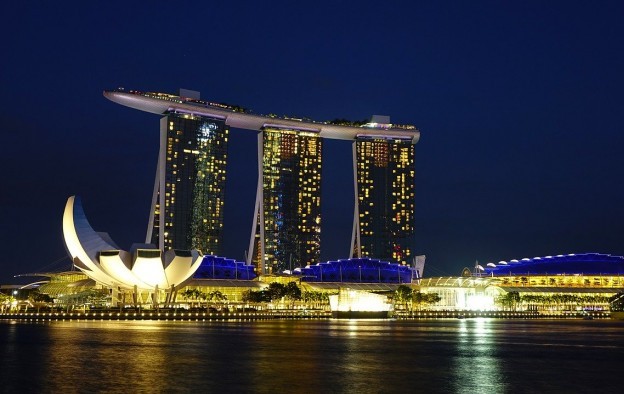 The operator of Singapore casino resort Marina Bay Sands (pictured) has introduced social distancing and crowd control measures at its gaming venue in response to the threat posed by the Covid-19 pandemic. The casino property has implemented precautionary measures since January, a spokesperson said in an emailed reply to GGRAsia.

“Marina Bay Sands is committed to safeguard the health and well-being of our community during the Covid-19 situation, while maintaining business continuity for the integrated resort,” a property spokesperson told us in the emailed statement on Tuesday.

Such actions include “social distancing measures” currently in place at the property’s casino, stated the person. “At the casino, we are practicing social distancing measures by opening and closing alternate areas/game types to spread the crowds,” added the spokesperson. Crowding at some areas of the gaming floor “is also being monitored,” said the person, adding that “further measures to disperse crowds around slot banks/tables will be practiced.”

GGRAsia has approached Singapore’s Casino Regulatory Authority on whether it had issued any specific requirements for the city-state’s gaming properties regarding measures to contain the further spread of the Covid-19 virus. We did not receive a reply by the time this story went online.

Singapore’s Ministry of Health reported 26 new cases of Covid-19 infection on Wednesday, bringing the city-state’s total to 313. Singapore’s first case of the virus infection – announced on January 23 – was a 66-year-old Chinese national from Wuhan, who had arrived the city-state with his family on January 20. He has since been discharged, according to the local government data.

At Marina Bay Sands, most attractions and businesses remain open, the property’s spokesperson told GGRAsia. But the property operator has suspended their nightly light and water show called Spectra since February 8; and the operations of the nightclub MARQUEE had also been suspended since March 13. These measures were applied in response to the government’s advisory that all ticketed entertainment events with 250 participants or more “were to be deferred or cancelled,” the person explained.

“We are monitoring the situation daily, and are prepared to make swift changes to property-wide measures and operations where needed, in the interest of public health,” stated the Marina Bay Sands spokesperson. The person said additionally that thermal screening points had been deployed across the entire property, and that the number of disinfection cycles had been increased.

Rival casino resort operator Genting Singapore had announced in a Tuesday filing that all facilities at its Resorts World Sentosa remained open, though with “stringent health and precautionary measures”.  But the company announced a raft of pay cuts for staff at managerial grade or above, due to disruption in the tourism trade caused by the Covid-19 pandemic.

The Singapore government has implemented a series of measures in an effort to “reduce the risk of imported cases and slow the transmission of the virus”. The Singapore Tourism Board announced this week that from Friday (March 20), all travellers entering Singapore “would be issued a 14-day stay home notice”.

The local authorities had already announced that visitors with recent travel history to mainland China, Iran, South Korea, Italy, France, Spain and Germany within the previous 14 days would not be allowed entry into Singapore, or to transit through Singapore.

Businesses in Singapore were also expected to be negatively affected by Malaysia’s travel restriction, starting from Wednesday (March 18). The Malaysian government announced a ban to overseas citizens going into the country, and that it would also be barring its own people from travelling overseas.

Business premises were to be closed except for markets that supply daily needs, and across the country, the movement of people would also be restricted. As a result, the Resorts World Genting casino complex near Kuala Lumpur, Malaysia’s capital, is currently closed until March 31. The casino resort is the main business unit of Genting Malaysia Bhd.