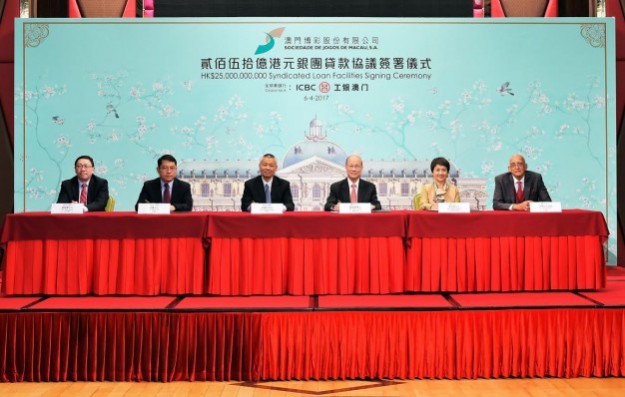 Following talks with the Macau government and a syndicate of lenders, Macau casino operator SJM Holdings Ltd has negotiated a HKD25-billion (US$3.2-billion) project loan for its Cotai project, Grand Lisboa Palace, part of which can be repaid after the firm’s current gaming concession expires in 2020.

The news was given on Thursday at a signing ceremony at its current flagship casino hotel Grand Lisboa, on Macau peninsula. Grand Lisboa Palace is not currently due to open until the first half of 2018.

SJM Holdings’ chief executive Ambrose So Shu Fai, said it had taken approximately two years to conclude the loan arrangement, due to legal technicalities involved, as well as the need to get the blessing of the Macau government.

He was speaking on Thursday at the signing ceremony (pictured) for the syndicated loan arranged with 19 financial institutions.

Industrial and Commercial Bank of China (Macau) acted as the global mandated lead arranger, sole book runner, facility agent and security agent for the syndicated loan facilities. According to the casino operator, the facilities were oversubscribed by 1.2 times.

Mr So told reporters: “It [the HKD25 billion] is only for the civil construction, excluding interior decoration, land costs, preliminary expenses and opening expenses [for Grand Lisboa Palace]. But with everything included, it [the investment budget] is about HKD36 billion.”

The CEO had recently denied that the budget of Grand Lisboa Palace had swelled, saying merely that some cost items had not previously been mentioned.

“We’re trying to keep to that budget [HKD36 billion] as much as possible,” said Mr So in his Thursday comments. He added: “…we are the last one [operator] to complete [a Cotai resort], and we do not have too much pressure on cost escalation.” That was understood to be a reference to the fact Macau’s restrictions on importing construction labour have in the past created competition for building workers when several large projects were being built at the same time.

Macau’s casino gross gaming revenue (GGR) had experienced 26 months of contraction judged year-on-year up to July 31 last year. Mr So was asked in Thursday whether that downturn had caused difficulty in the negotiation of a loan for Grand Lisboa Palace.

Mr So also said that his firm has been trying to catch up “as quickly as possible” with the construction of Grand Lisboa Palace. A fire broke out at the site on March 17. It reportedly led to the evacuation of over 500 workers and damaged some construction materials.

“We’re trying to catch up as quickly as possible with the project so as not to delay it. But we didn’t see many losses from the fire. And the police are still investigating the cause of it,” Mr So said.

Some Macau casinos visited by GGRAsia on Thursday, actually had tables that were closed, notwithstanding strong consumer demand during Chinese New Year (CNY). The reasons for some tables being... END_OF_DOCUMENT_TOKEN_TO_BE_REPLACED