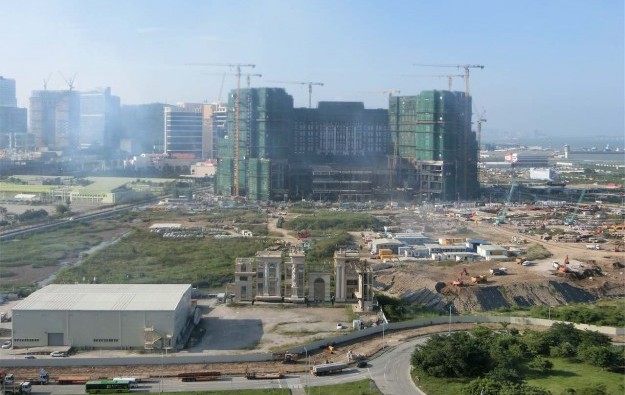 The management of Macau casino operator SJM Holdings Ltd said on a conference call with analysts on Thursday – following its first-quarter earnings results – that the opening of its under-construction new resort on Cotai (pictured in a file photo) would be moved to the second half of 2018.

The company had previously said that it expected construction of the Grand Lisboa Palace to be completed by the end of 2017, with an opening in the first half of 2018.

The cost of Grand Lisboa Palace could go higher than the currently-stated HKD36 billion (US$4.63 billion) if the project is delayed beyond its newly-declared deadline of the second half of 2018, said a Thursday note from brokerage Sanford C. Bernstein Ltd.

“Management highlighted that the opening will now be in the second half 2018 (prior [previously] first half and our estimate of summer 2018),” wrote Sanford Bernstein analysts Vitaly Umansky, Zhen Gong and Yang Xie.

They added: “If the project keeps getting pushed back, costs may see some increase in our view.”

Analyst Grant Govertsen, of Union Gaming Securities Asia Ltd, stated in his Thursday memo on SJM Holdings’ first-quarter numbers: “Management has now confirmed a second-half 2018 opening for Grand Lisboa Palace, which is in line with what we’ve been modelling.”

As recently as April 6, at the signing ceremony for a HKD25-billion package of syndicated loans for Grand Lisboa Palace, the firm’s chief executive Ambrose So Shu Fai had referred to a first-half 2018 opening for the property.

On March 16, Mr So had denied in comments to local media any suggestion that the budget of HKD36 billion – as stated at that time – represented an increase from the HKD30 billion outlined in earlier company statements. He said some cost items had not previously been mentioned.

Sanford Bernstein noted: “Management highlighted the property will differentiate itself with two, three-Michelin star restaurants, and a fashion theme centred around Versace. However, the company is yet to provide greater programming information.”

Some Macau casinos visited by GGRAsia on Thursday, actually had tables that were closed, notwithstanding strong consumer demand during Chinese New Year (CNY). The reasons for some tables being... END_OF_DOCUMENT_TOKEN_TO_BE_REPLACED