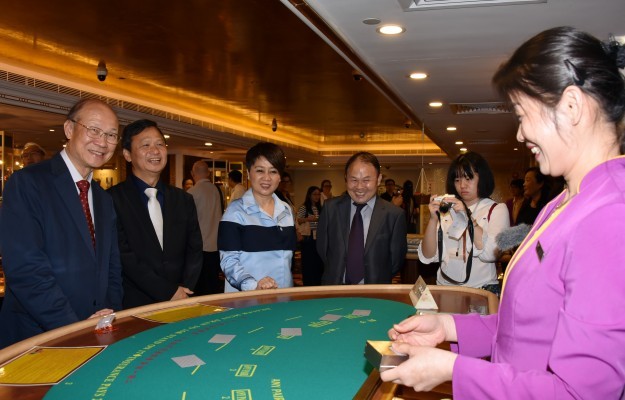 Ambrose So Shu Fai (pictured left), chief executive at Macau casino operator SJM Holdings Ltd, confirmed on Wednesday the firm’s intention to seek a two-year extension for its Macau gaming concession prior to its scheduled expiry in 2020.

He said the reason was to allow the firm to compete for fresh Macau gaming rights “at the same pace” as four other gaming operators in the city, that see their current rights expire in 2022. He added that the firm had not made such a request to the Macau government.

It was not clear from Mr So’s comments whether that would also mean a two-year extension for Macau operator MGM China Holdings Ltd. Its Macau gaming rights technically stem from a sub-concession spun off from SJM Holdings’ rights.

Mr So made the remarks on Wednesday on the sidelines of the launch of the “Macau Gaming History Gallery” located at Lisboa-Crystal Palace in Hotel Lisboa. The gallery exhibits a range of vintage gaming equipment – some dating from the 1970s, when SJM Holdings’ parent STDM held a licence monopoly under the group’s founder Stanley Ho Hung Sun.

Mr So remarked, regarding the modern concession question: “…it is clear that a new legislation will be required if the extension of a licence of an existing concessionaire is over five years [in length].

He added, referring to the city’s casino regulator: “This is the issue that the Gaming Inspection and Coordination Bureau has mentioned before.”

The SJM Holdings executive said a two-year extension would be a “reasonable” arrangement. SJM Holdings’ first Cotai resort, the HKD36-billion (US$4.6 billion) Grand Lisboa Palace, is not due to open until the second half of 2019.

“It is a normal thought that everyone can cast the bid [for a gaming concession] at the same pace…for us, of course we would like to see it [a two-year extension] happen, and we’re very much interested to cast a bid. With so much having been invested in the Grand Lisboa Palace project, we have to be able to answer our shareholders regarding how the business will continue to operate in the future,” Mr So said.

“We want to contain the number of satellite casinos – this is something we inherited from the past,” the SJM Holdings executive remarked when asked for his views on what might happen post-2020 to the firm’s existing service agreements with several casino hotels controlled by third parties but relying on his firm’s gaming permit.

“But of course the conditions [for satellite casino operators] may be changed dependent upon the new [gaming concession] tender conditions,” Mr So said.

Speaking to media, Mr So also noted that the firm was likely to see the opening of its Cotai project Grand Lisboa Palace in the “second half of 2019”.

“As we have mentioned before, at this moment – after having experienced fires and the typhoon [Hato] – we have been trying our best in speeding up to target all construction to be completed by the end of this year, so that we have by then sufficient conditions to apply to the government to operate the project. And as you know, this application procedure could take months,” Mr So said.

When asked if it is likely that the Grand Lisboa Palace project will open in phases, Mr So replied: “…we can only control when we can finish the project and to have the conditions to apply for it to operate. We have to fulfil the most basic requirements to operate the business, and we don’t rule out that some of the facilities may not be ready by then.”

In a May 2 note – issued following SJM Holdings’ first-quarter earnings results - brokerage Sanford C. Bernstein Ltd said it expected the opening of the Grand Lisboa Palace project “to be delayed into late 2019”. The institution also cited the firm as saying that it would like to “open as many facilities as possible” at the initial stage, and had “started working with some junket operators that are interested in the property”.

At the Wednesday event, Mr So also made brief remarks on the reported removal of UnionPay point-of-sale devices from what analysts termed either “pawnshops” or “jewellery shops” located in Cotai casinos.

“I don’t think that will cause a big impact,” Mr So said. “For the whole gaming industry, there had already been instances and rumours in the past where there were changes [introduced to payment machines], but I couldn’t see a big impact imposed on the industry,” Mr So added.

China has moved one step closer towards reopening, by relaxing some its Covid-19 control measures, with most infected people now able to quarantine at home rather than in state-sanctioned... END_OF_DOCUMENT_TOKEN_TO_BE_REPLACED