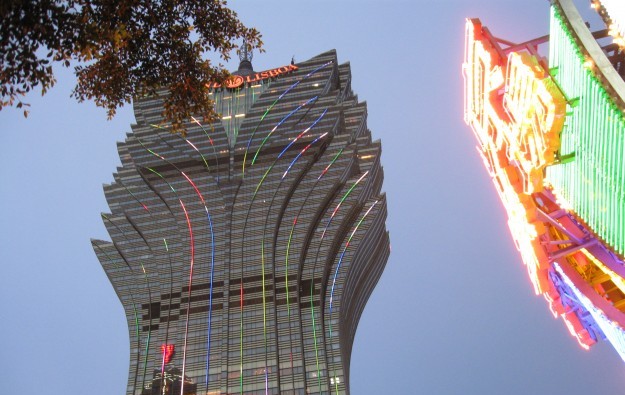 SJM Holdings Ltd retook the lead in market share of gross gaming revenue (GGR) for November with 22.61 percent according to industry figures compiled by GGRAsia. That was despite the fact that SJM’s tally for November was down approximately 0.8 percentage points from the previous month, when it was in second place.

The operator of the Grand Lisboa casino hotel (pictured) had a market share of 23.4 percent in October.

Sands China Ltd, which held the lead in October with a 23.7-percent tally, was second in November, with a share of 22.55 percent. Galaxy Entertainment Group Ltd saw its share increase slightly to 21.51 percent in November.

Earlier on Monday, the city’s gaming regulator announced that Macau’s GGR for November dropped 19.6 percent year-on-year to MOP24.27 billion (US$3.04 billion). It was the sixth consecutive month of declines judged against year prior periods.

Melco Crown Entertainment Ltd had a market share of 13.50 percent in November, down from 14.3 percent in October. MGM China Holdings Ltd and Wynn Macau Ltd had 10.98 percent and 8.85 percent respectively of November’s casino revenue.

A note from Union Gaming Research Macau Ltd issued on Monday said it “would not be surprised” to see Macau’s first quarter 2015 GGR “decline in the low 20 percent range”.

Analysts Grant Govertsen and Felicity Chiang wrote: “This forecast largely assumes that there is no material change in either mass or VIP trends, which, at this point, we would be more inclined to believe would surprise us to the upside, rather than to the downside.”

Chinese New Year falls on February 19 next year, compared to January 31 in 2014.

Union Gaming said: “Given the timing of Chinese New Year this year…we would expect total GGR in January 2015 to be much like the final months of 2014, or around MOP24 billion to MOP25 billion (down 13 percent to 17 percent) [year-on-year].

“We would then expect 100 percent of the Chinese New Year benefit to hit February 2015, but are still expecting a decline of 20 percent or more year-on-year (on an extremely tough +40 percent comp),” they added, referring to comparison between the February 2014 and February 2013 GGR numbers.

A commentary on the November GGR numbers issued by Carlo Santarelli of Deutsche Bank AG, based in New York, said the bank anticipated “further colour on segment performance” later this week. That’s a reference to the split between VIP – which has been in decline for the second half of the year – and mass gaming, which showed its first year-on-year contraction for 2014 only in October.

The investment community is watching mass-market trends in the fourth quarter especially closely, for any information they might provide on issues including possible margin erosion for Macau operators during 2015. Mass-market table play normally has better margins than VIP table play because of lower player reinvestment costs.

The Deutsche Bank analyst also raised the issue of the effect of “table reclassification” on Macau GGR numbers.

A number of investment analysts, including at Japanese finance house Nomura, last month warned that the volumes of VIP revenue and mass revenue reported by the Macau casino industry in November and December were “likely to be distorted by table reclassification”.

That’s a reference to the redesignation by some Macau operators of mass-market casino zones as ‘members-only’ VIP ones following the mass-floor smoking ban introduced on October 6.

Mr Santarelli wrote: “Recall, reclassifications should have the following effects on segment results; 1) an artificial lowering of mass revenue, 2) an artificial boosting of VIP revenue, and 3) an implied higher than normal VIP hold as premium mass revenue has no junket drop associated with it.”

Macau casino operator MGM China Holdings Ltd had a “record” market share in January, and its venues were the “highest-earning businesses” in the portfolio of the majority owner MGM Resorts... END_OF_DOCUMENT_TOKEN_TO_BE_REPLACED