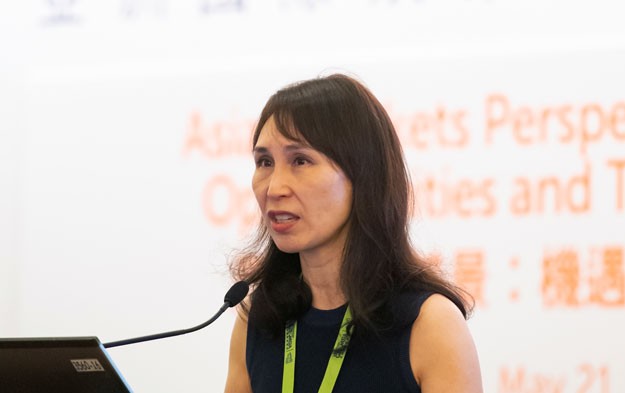 Daisy Ho Chiu Fung (pictured), chairman and executive director of SJM Holdings Ltd, told GGRAsia that the Macau casino operator was “working” on improving its business. She was speaking on Tuesday on the sidelines of the Global Gaming Expo (G2E) Asia 2019.

It was in response to a question from us regarding a Tuesday note from brokerage Sanford C. Bernstein Ltd suggesting SJM Holdings had the worst margins on earnings before interest, taxation, depreciation and amortisation (EBITDA) of any of Macau’s six gaming operators.

The brokerage mentioned operational efficiency as a challenge for SJM Holdings.

Ms Ho said: “Give us time, we are working on it, as you can see in in our first-quarter result, or even our last-year result … we are picking up. Of course we are lagging a bit behind.”

Profit for the Macau casino operator increased 16.5 percent year-on-year in the first quarter of 2019, according to unaudited highlights of the business filed in April to the Hong Kong Stock Exchange.

Ms Ho’s business experience includes being a senior executive at Shun Tak Holdings Ltd, a Hong Kong-listed conglomerate covering sectors including shipping and real estate. It was founded by her father Stanley Ho Hung Sun, and runs the TurboJet fast ferry services that were the main means of travel between Hong Kong and Macau prior to the opening in October of the Hong Kong-Zhuhai-Macau Bridge.

It was announced in April 2018 that Ms Ho would be taking over as chairman of SJM Holdings in June that year.

In her Tuesday comments to GGRAsia, Ms Ho – speaking in her role as head of SJM Holdings – also referred to macroeconomic factors out of Macau casino operators’ immediate control.

“Competition is tough in Macau and is also changing. It [the local market] is susceptible to a lot of macro factors,” she told us.

A number of investment analysts has mentioned the United States-China trade war as an element in the year-on-year decline in demand in Macau for VIP gambling among Chinese players seen in the first quarter.

GGRAsia also asked Ms Ho about a suggestion that Grand Lisboa Palace, the new HKD36 billion (US$4.6 billion) casino resort from SJM Holdings, might not open until the summer next year. It will be the company’s first foray into the Cotai market in Macau.

Ms Ho said regarding whether the resort might only open in the summer: “Whatever analysts said is what analysts said.”

SJM Holdings noted in a February 28 statement that construction work for the firm’s Grand Lisboa Palace would be completed “in the first half of this year”, with operations beginning “as soon as possible thereafter”.

“While we currently model Grand Lisboa Palace opening in first quarter 2020, we would not be surprised if opening does not occur until summer 2020,” Sanford Bernstein analysts Vitaly Umansky, Eunice Lee and Kelsey Zhu wrote in their Tuesday memo.

The Sanford Bernstein analysts had also stated in their note: “Over the past five years, SJM’s market share has fallen from over 23 percent to an historic low of 14 percent. SJM has very limited presence in the critically-important premium-mass segment and Grand Lisboa Palace will not be the panacea to cure that ill.”

The brokerage added: “Poor operational efficiency is not merely solved by opening Grand Lisboa Palace. SJM has, by far, the lowest EBITDA margins in the Macau industry. SJM’s EBITDA margin is below its competitors, both at the consolidated operator level and within each segment that it reports.”

Casino operator Melco Resorts and Entertainment Ltd announced on Thursday that it would launch at the end of June a new, themed zone for “family-friendly” entertainment at its majority-owned... END_OF_DOCUMENT_TOKEN_TO_BE_REPLACED