SJM not yet asked for Macau concession extension: CEO 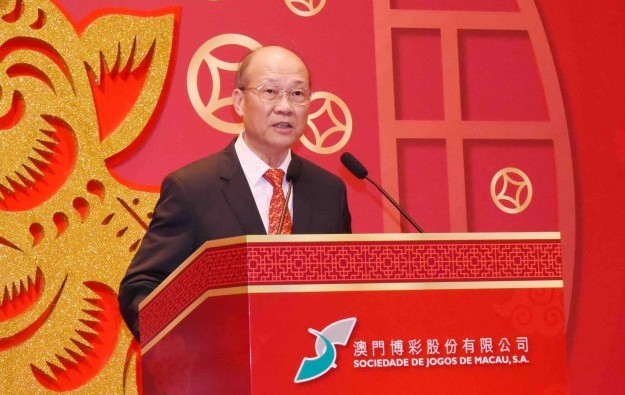 The chief executive of Macau casino operator SJM Holdings Ltd has confirmed the company has not yet asked the city’s government for an extension of its current gaming concession, although those rights are due to expire in March next year, and the firm’s costly new Cotai project is not scheduled to be completed until the end of this year.

Ambrose So Shu Fai (pictured) was speaking on the sidelines of a Chinese New Year banquet hosted by the company and attended by the city’s leader, Chief Executive Fernando Chui Sai On, and by Paulo Martins Chan, head of Macau’s gaming regulator, the Gaming Inspection and Coordination Bureau.

Mr So was quizzed by local media about whether an extension of gaming rights had been asked for yet. The CEO had said previously the group would like one to put it on the same 2022 finish date as four of the other local concessions. Macau law says a formal request must be made and eventually approved at least six months before the end of SJM Holding’s current concession.

Pressed on why – when the equivalent of billions of U.S. dollars was at stake – there had not yet been clarity on the issue, Mr So stated: “We choose our time and when we do it. It is not for you [the media] to ask me when to do it.”

He added: “We will apply within the time limit. We are still complying with the law.”

Macau gaming law states that the term of a gaming concession cannot exceed 20 years. It also states that if a concession is awarded for a period shorter than 20 years, the government may authorise an extension, provided it does not exceed the maximum term stated in the law. SJM Holdings’ concession was granted for 18 years only.

According to the law, the licences of the existing holders can be extended for a maximum of up to five years from the 20-year term.

He stated: “Whether there is another operator coming in is a decision for the Macau SAR government or maybe the central government.”

He denied any suggestion that it was part of a factional struggle within the family of SJM Holdings’ founder Stanley Ho Hung Sun for control of the casino operator.

“I think this is an opportunity to say to the public that ‘We really do have one voice’ rather than having the media – or whoever – speculating,” he stated.

He was also asked whether he thought Ms Pansy Ho was a competent leader within the Macau casino industry in terms of the work she had done at MGM China Holdings Ltd, which has Macau gaming rights as a sub-concession of SJM Holdings.

Mr So stated: “I have not had the privilege of working with her in the casino business, so I cannot comment on that point.”

He added: “Who runs SJM is really up to the shareholders. It is not for me”.

Regarding the launch date of the HKD36-billion (US$4.6-billion) Grand Lisboa Palace on Cotai, Mr So said: “I cannot say exactly when it will open. I can say we are confident that we will complete the construction and be ready for applying for a licence within 2019. And this is something for the Macau relevant departments to check everything is in order, before they grant us an opening licence.”

The CEO was quizzed additionally on the outlook for the Macau gaming market in the rest of 2019, given that January saw a year-on-year fall in casino gross gaming revenue, the first such monthly decline since 2016.

Mr So said, referring to the the U.S.-China trade war: “I think this is more of a psychological effect than a real effect. The whole world is under very uncertain conditions.”

Though he further noted: “I am still very optimistic on the future of Macau and of course SJM as well.”

He said the opening in October of the Hong Kong-Zhuhai-Macau Bridge had “really bumped up” the number of people coming to Macau.

Asked if bridge users were likely to be casino customers, Mr So said: “If you have more people coming to Macau there is the possibility – the probability – that [gaming] revenue will increase.”

It is likely that Macau will shortly have a third round of citywide centre-based Covid-19 testing in little more than a week, after the results so far of a second mass test – that was due to finish... END_OF_DOCUMENT_TOKEN_TO_BE_REPLACED