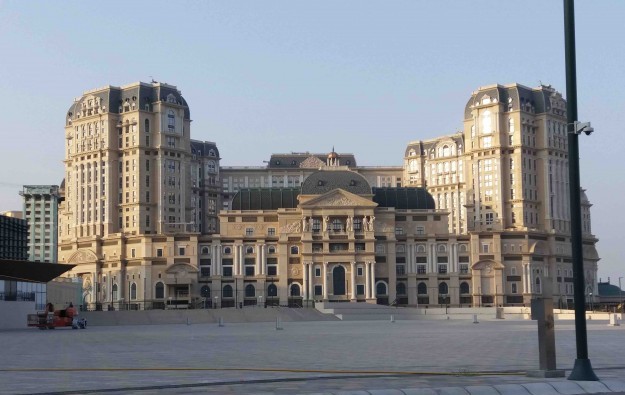 STDM is the controlling shareholder of SJM Holdings, with a stake of almost 54.1 percent. The retail deal with SJM Holdings involves STDM subsidiary NYH Gestão de Vendas a Retalho Lda.

The STDM group runs the New Yaohan department store on Macau peninsula. The upmarket retail venue is popular among mainland Chinese visitors to Macau. The “New Yaohan” brand exists in Macau since 1997.

SJM Holdings said in a Tuesday filing to the Hong Kong Stock Exchange that it had entered into a “right to use a shop agreement” with NYH for the purpose of the latter “operating a department store under the brand name or style of ‘New Yaohan’ or any other name as approved” by SJM Holdings, at Grand Lisboa Palace.

The “right to use a shop agreement” is for an initial term of 12 years and 6 months. The deal is expected to come into force in April this year, according to the filing.

NYH will enjoy an initial fee-free period of six months once the agreement comes into force. After that period, it will pay SJM Holdings a monthly fee based on its monthly sales turnover. The fee rate will increase from 4 percent in the first three years of the agreement, to a minimum of 5 percent in years 10 to 12.

The agreement also sees NYH paying SJM Holdings a monthly fee and a promotion levy. The aggregate stands at HKD2.4 million (US$309,000) for the first three years of the deal, then will increase by 7.5 percent at the end of each three-year period.

The agreement includes annual caps for the payments to be made by NYH to SJM Holdings. Such caps vary between HKD40.4 million for this year, to a peak HKD161.6 million in 2031.

The launch of SJM Holdings’ HKD39-billion Grand Lisboa Palace is to take place in the second half of 2020, according to the casino operator’s management.

“The entering into of the right to use a shop agreement is considered strategically important to the success of the Grand Lisboa Palace,” SJM Holdings stated.

It added: “‘New Yaohan’, being a well-known department store brand, is expected to draw traffic to both gaming and non-gaming facilities of the Grand Lisboa Palace; and the entering into of the right to use a shop agreement will generate income for the group from an anchor retailer, who will take up approximately one-third of the retail space of the Grand Lisboa Palace, on a long-term basis.”

SJM Holdings includes a number of directors considered to have a material interest in the deal with NYH in view of their involvement in the STDM group. SJM Holdings stated in its Tuesday filing that, because of that, directors Daisy Ho Chiu Fung, Angela Leong On Kei, Chan Un Chan, David Shum Hong Kuen and Patrick Tsang On Yip had been absent from the company board meeting that discussed and voted the agreement with NYH.