SJM to introduce clean-energy bus service in May 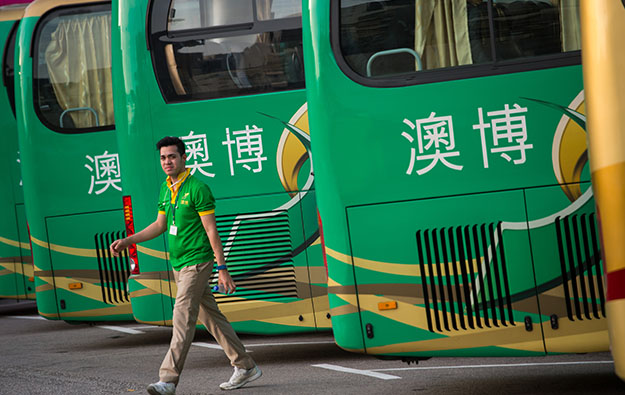 Macau casino operator SJM Holdings Ltd announced on Thursday that one of its subsidiaries would introduce a so-called “new-energy” shuttle bus service in Macau starting from May 2018. The number of clean-energy buses will be increased gradually, the firm stated in a press release.

The company said the move demonstrated SJM Holdings’ support for the Macau government’s aspiration “of gradually replacing the entire shuttle bus fleet of casino operators by new-energy buses for the improvement of street-level air quality in Macau”.

In mid-March, the head of Macau’s Transport Bureau, Lam Hin San, noted he hoped that by the year 2023 the city’s six casino operators would be exclusively using what he termed clean-energy vehicles in their shuttle bus services for customers.

On Thursday, SJM Holdings said it would run its “new-energy shuttle bus service” with either electricity-powered buses or some driven by compressed natural gas.

“SJM believes that the above measures will optimise Macau’s transportation, and enhance the overall environment for residents and visitors, while supporting Macau’s development into a world-class green tourism city,” said the firm.

SJM Holdings is the third casino operator in Macau to announce recently the operation of clean-energy vehicles in their shuttle bus services for patrons.

Melco Resorts and Entertainment Ltd said earlier this week it had purchased 20 electricity-powered buses to serve its Macau properties, starting from May. In March, Galaxy Entertainment Group Ltd said it had become the first of the city’s gaming concessionaires to launch regularly-scheduled electrically-powered shuttle buses to transport patrons.

The Macau government announced on Thursday the cancellation of a plan for a nucleic acid test certificate requirement with 48 hour validity, for casino staff, casino customers and official visitors... END_OF_DOCUMENT_TOKEN_TO_BE_REPLACED