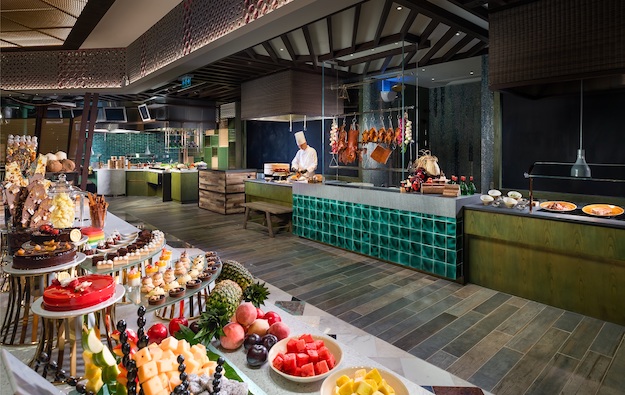 Macau casino developer and operator SJM Holdings Ltd announced on Thursday an array of dining options for its “soon-to-be launched” Cotai casino resort Grand Lisboa Palace. The HKD39-billion (US$5 billion) scheme is to house a Grand Lisboa Palace Hotel, a “Palazzo Versace”-branded hotel, and a “Karl Lagerfeld”-branded hotel, along with gaming and other non-gaming facilities.

Heading the list of dining options at Grand Lisboa Palace will be The Grand Buffet (pictured), formerly one of the highlights at the Grand Lisboa casino-hotel. It will be relaunched with more than 600 international delicacies available, embracing Chinese, Western and Asian cuisines, according to Thursday’s release.

These offerings are to be complemented by several casual dining options, such as the GLP Café, Eight Treasures and GLP Lobby Lounge, stated the firm.

The release quoted Daisy Ho Chiu Fung, chairman of SJM Holdings, as saying: “Our vision is to develop Grand Lisboa Palace as a gastronomy hub for food lovers worldwide, who will be impressed by the curated and innovative dining experiences delivered by our acclaimed self-established brands and food and beverage partners from different parts of the world.”

According to SJM Holdings’ first-quarter highlights, published in May, Grand Lisboa Palace was due to open in the first half this year. In Thursday’s release, the company stated only that the Cotai property would be launched “soon”.

Bloomberry Resorts Corp wants to build a third casino resort on the Philippines’ main island, Luzon. It would be at Paniman, a coastal community in Cavite, about 66 kilometres (41 miles) southwest... END_OF_DOCUMENT_TOKEN_TO_BE_REPLACED