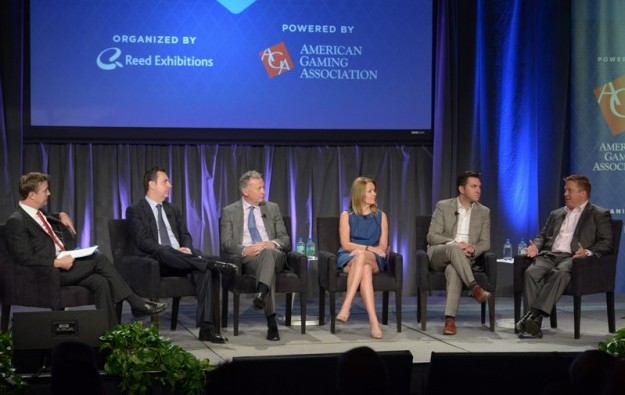 The slot technology industry – much of it originally from the U.S. – is getting better at serving multiple markets around the world, said Patti Hart (pictured, centre right), chief executive of International Game Technology (IGT).

“Whether you are in Mexico, or South America or Macau or the Philippines or Australia or Europe, people want to engage with experiences that they find relevant to their everyday life. We have to think about that in our industry, because a ‘one to many’ model really doesn’t work,” stated Ms Hart.

On September 25, IGT announced an agreement to supply several casino system products to Philippines casino resort City of Dreams Manila, to be operated by a unit of Nasdaq-listed Melco Crown Entertainment Ltd.

But Ms Hart said on Wednesday that localisation of consumer-facing product had to be done efficiently.

“We think about how to…do it in an efficient way, that really doesn’t inject too much cost into the process and slow everything down.

“When I look at products now in places outside the United States…I would say in the last three or four years every manufacturer, every supplier has made significant progress. We’re taking pieces of something from the U.S., but not the finished product,” she added.

Jamie Odell (pictured, centre left), CEO of Australian manufacturer Aristocrat Leisure Ltd, speaking on the same panel, said that local regulation as well as the needs of the local consumers, could have an impact on product development.

“To think that you could take games from this floor [at the Venetian Las Vegas] to the Macau floor and be successful [is misleading] – it’s completely different,” he explained.

Mr Odell added: “In Macau the [slot] regulations are changing at the moment and changing pretty constantly towards their requirements of responsible gaming. And on the casino floors there’s the [pending total main floor] smoking ban – all sorts of different changes led by regulation. We have to adapt our games more and more for that individual market.”

“Language is one of the issues. In Macau now everything has to be dual language [Chinese and English], with the first language being Chinese,” he said.

Mr Odell continued: “It was true to say that Australian and Asian players were one [consumer group] when we first started to explore the [Asian] markets. Now we make games for Macau and other markets. In Asia, the Philippines, Singapore, Vietnam – and [in the future] Japan – all of these markets have different forms of gaming requirements. So now we don’t even think of games in Macau and the Philippines being the same these days.”

In a commentary on the recently announced proposed acquisition of IGT by Italy-based lottery specialist GTech SpA for a total consideration of US$6.4 billion, IGT’s Ms Hart said: “I’ve had a number of people come through my [show] booth and say to me ‘It’s a real shame you had to sell your company’. And I said, ‘No, we didn’t have to sell our company, we chose to put ourselves together with what we think is a very powerful company to create a better company’.”

She added: “I think there’s a bit of a mentality [among outsiders] that you don’t do it unless you have to, as opposed to ‘I choose to’. I think we’re now giving permission to others to make those [kinds of] choices; if those choices are the right thing for players and for your shareholders and employees.”

Most of Macau’s casino operators are likely to generate positive free cash flow in the first quarter, given the robust recovery level of mass-market gross gaming revenue (GGR) in January, relative... END_OF_DOCUMENT_TOKEN_TO_BE_REPLACED