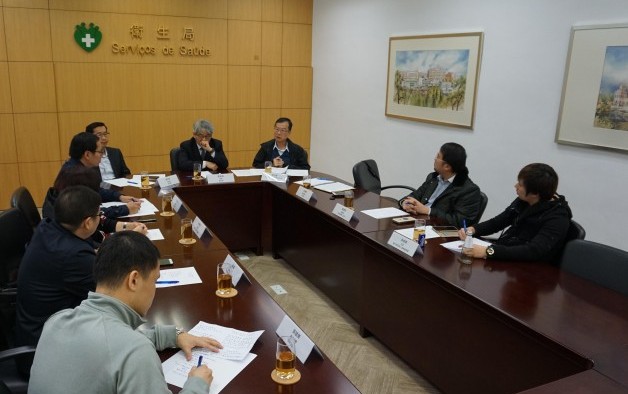 Alleged violations of Macau’s implemented update to casino smoking rules have most commonly been witnessed in some of the city’s VIP gambling rooms or their immediate facilities. So said the city’s traditionalist labour group, the Macau Federation of Trade Unions, in a press statement issued on Tuesday.

Tableside smoking was supposed to have ended in VIP rooms – the only places where such activity had been still tolerated – when new rules on smoking in casinos in Macau came into effect on January 1.

The Federation of Trade Unions’ statement – on what has been a vexed topic for local casino workers concerned about the adverse effects to health of second-hand smoke – was issued following a recent meeting (pictured) with the government.

It involved officials from the Health Bureau and its Tobacco Prevention and Control Office, and Leong Sun Iok, a local legislator representing the trade unions. Representatives from several affiliate gaming labour groups of the Federation also attended. They spoke about incidents some of their member workers had encountered in the workplace, the Federation’s statement noted.

Washrooms had become a new “black-spot” for smoking, particularly those in the VIP gaming areas, the Federation noted in the statement citing workers’ feedback. Some VIP gaming clients were also offered cigarettes on the gaming floor by other parties, even though that is against the smoking rules, the Federation claimed.

Smoking patrons had also allegedly been allowed in some cases to use new smoking lounges that were still pending government certification, the representatives of the gaming labour groups told the officials in the meeting. Names of those gaming venues, however, were not disclosed in the Federation’s Tuesday statement.

The statement has also cited local government statistics that out of 141 complaints the authorities had received via the smoking control hotline so far this month, as many as 90 percent of them were related to alleged violation in VIP gaming areas of the rules.

An update issued by the Health Bureau last week showed that it had given permission for an aggregate of 378 new-style smoking lounges, meaning no new venues had been approved since December 31. Also, as of that update, the bureau had received a total of 505 requests for installing new smoking lounges in casinos.

The Federation’s Tuesday statement cited remarks by the Health Bureau that it would consider setting up a 24-hour hotline for smoking control enquiries and complaints, and pledged that it would “reinforce” inspections in cases of alleged violation on gaming floors of the updated smoking control rules.

Stocks of Macau casino operators rose substantially in the Hong Kong market on Monday, after the local government announced on Friday a bill proposing a new regulatory system for gaming... END_OF_DOCUMENT_TOKEN_TO_BE_REPLACED