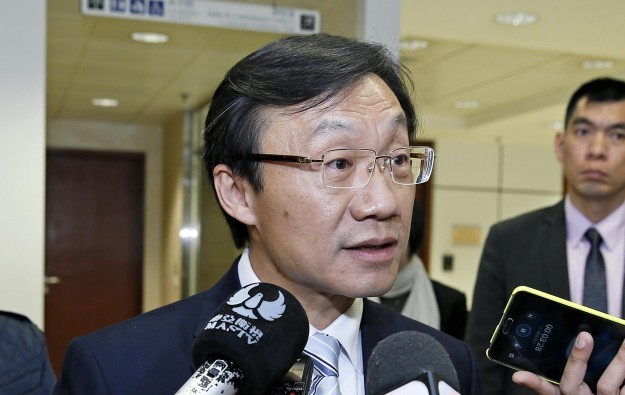 The Macau government is to submit a new bill on the control of smoking in public places – including casinos – within the next fortnight.

Macau’s Secretary for Social Affairs and Culture, Alexis Tam Chon Weng (pictured), on Tuesday said the government would send the bill to the city’s Legislative Assembly before the end of the month. The government remains committed to a full smoking ban, including the removal of enclosed smoking lounges currently located on some casino mass floors, Mr Tam told reporters.

But a group said to be representing Macau’s casino operators on the smoking issue told GGRAsia by email on Wednesday that the companies hoped there was still the chance of an alternative solution.

“Macau is facing tough times and introducing additional restrictions that could further impact Macau’s economy should be carefully evaluated, particularly if alternative solutions are available, such as offering customers a choice through well-constructed smoking lounges that are independently ventilated,” said the statement from ‘Macau Coalition’, a group that says it represents all six Macau casino operators on the smoking issue.

Comments from Mr Tam quoted in Wednesday’s edition of Portuguese-language newspaper Jornal Tribuna de Macau seemed to rule out any compromise on smoking lounges. “The government said it would introduce the [new] bill in the first half [of 2015]. I can guarantee that it [the bill] will be announced by the end of the month; without smoking lounges,” Mr Tam was reported to have said.

Smoking on casino main floors in Macau is currently only allowed in airport-style enclosed smoking lounges that do not contain any gaming tables or slot machines. Lighting a cigarette while gambling is at present still allowed in VIP rooms.

The statement emailed to GGRAsia on Wednesday by the group representing the casinos said: “Feedback on the establishment of these smoking lounges from employees and customers alike has been largely positive. While we fully support the Macau SAR Government’s Smoking Control Act as the health and wellbeing of employees and customers are of paramount importance, we are united in our stand that our existing smoking lounges for patrons should be maintained and that careful consideration must be given to all the impacts that an enactment of the proposed law would have.”

The findings of a survey commissioned by Macau’s six gaming operators and released on Tuesday, suggested that about two-thirds, or 66 percent, of 34,000 Macau casino workers that responded to the poll “support the retention and development of smoking lounges within the casinos”.

In a joint same-day statement on the results of the poll, the Macau Coalition grouping said all sides should recognise “there is strong support to retain well-constructed smoking lounges, and that a full smoking ban could have a negative impact on Macau’s wider economy”.

Several members of Macau’s Legislative Assembly have recently expressed concern over the potential economic impact of a full smoking ban in the city’s casinos. Legislator Si Ka Lon has urged the government to explain the rationale behind its policy on smoking in casinos, supported by data.

On Tuesday, Macau’s Chief Executive Fernando Chui Sai On said there was no indication of correlation between public policy on smoking and Macau gaming revenue. Speaking to reporters before a visit to Beijing, Mr Chui said that whether a full smoking ban would affect GGR remained to be seen, given that the monthly figures have been falling even though smoking in some parts of Macau casinos is currently permitted.