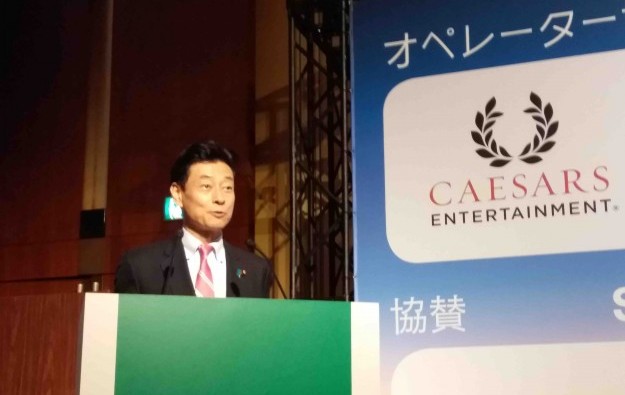 It is the “strong wish” of the Japanese government to pass the Integrated Resorts (IR) Implementation Bill in the current parliamentary session, which ends on June 20, said on Thursday Yasutoshi Nishimura (pictured), Japan’s Deputy Cabinet Secretary.

“We hope that not only will the ruling party members support this but also the opposition,” said the official. He mentioned in particular the government’s desire that the Japan Restoration Party – part of the opposition – would get behind the measure.

The governing parties are the Liberal Democratic Party and its smaller partner Komeito.

Mr Nishimura – who mentioned he is vice chairman of an all-party working group on the implementation of the casino policy – was speaking during a late morning session of the Japan Gaming Congress in Tokyo, after being unable to attend a panel earlier in the day.

The official added that in approximately a year – assuming the bill goes through as planned – the “government basic policy” on integrated resorts would need to be issued.

Local governments would then formulate their proposals and talk to casino operators as potential partners.

“We hope to make the process as smooth as possible,” said Mr Nishimura. “If all goes smoothly, in the early 2020s the first IRs will open in Japan,” he added.

The official noted that more than 20 million foreign visitors were coming to Japan annually, and the aim was to promote what he termed “healthy entertainment” for overseas visitors and for locals.

“Nowadays there are not enough venues for musical events, so we hope there will be more,” he said.

“We hope the [casino] industry will work with us to make IRs a success… we want a win-win… and to show a new side to Japan,” stated Mr Nishimura.

Bloomberry Resorts Corp wants to build a third casino resort on the Philippines’ main island, Luzon. It would be at Paniman, a coastal community in Cavite, about 66 kilometres (41 miles) southwest... END_OF_DOCUMENT_TOKEN_TO_BE_REPLACED