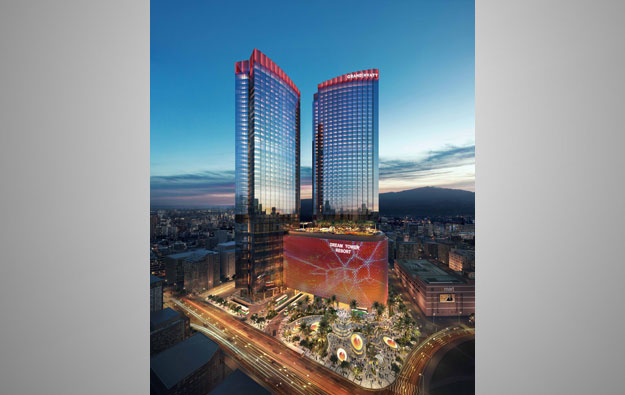 Jeju Dream Tower (pictured in an artist’s rendering), a new resort with foreigner-only casino in a downtown area of Jeju City, the capital of that South Korean holiday island, is to be evaluated by the local authorities regarding its social impact on the host community. The local body responsible for gaming industry oversight affirmed to GGRAsia the information in response to our enquiry.

The structure of the project has already been largely completed according to local media reports.

One of the reasons for the evaluation by local authorities is that the scheme’s promoters have sought to link the gaming licensing regime associated with an existing Jeju casino property, to the new scheme. A similar linking to an existing property’s casino permission happened before Hong Kong-listed Landing International Development Ltd opened in February 2018 the casino at its new Jeju Shinhwa World resort.

Jeju, as a semi-autonomous region, has its own regulatory powers concerning casinos there. The island also offers visa-on-arrival for Chinese tourists – a key target market for local casinos – provided those visitors are coming direct to Jeju via an international flight or cruise sailing.

The impact study regarding Jeju Dream Tower – a project that is promoted by a unit of Lotte Corp, a South Korea-based international conglomerate that has interests including hotels, duty-free shopping and food manufacturing – will consider whether the scheme has local economic benefits, and the project’s effects, if any, on tourism and the local housing and property scene.

According to the Casino Policy Division – which has the local role as a regulator – the evaluation is legally required in cases where an existing Jeju casino operator wishes to expand, by more than two times, its gaming-operations capacity locally.

According to the reply received by GGRAsia from the Casino Policy Division, the social impact evaluation applicable to Jeju Dream Tower is stipulated in the amended “Regulations on the Management and Supervision of the Jeju Special Self-Governing Province’s Casino Business”. Such modified regulations were passed last month by local lawmakers, and were already in effect, affirmed the regulator.

Other factors to be considered by such a study were: what local employment opportunities were being offered; community security; the cultural and educational influences of a scheme; and its impact on the environment, including residential areas close to a scheme, the Casino Policy Division noted to GGRAsia.

“The [deliberation] committee is also authorised to judge on the survey of public opinions that Jeju Dream Tower has to conduct, in order to assess the impact that could be imposed by a casino property on its surrounding neighbourhoods,” the Casino Policy Division noted to us in its emailed response.

The construction of the Jeju Dream Tower began in May 2016. Its 38 floors make it the tallest building on Jeju. The complex is – according to previous announcements by the promoter – to house a Grand Hyatt-branded hotel as well as a casino and other leisure facilities.

Some Macau casinos visited by GGRAsia on Thursday, actually had tables that were closed, notwithstanding strong consumer demand during Chinese New Year (CNY). The reasons for some tables being... END_OF_DOCUMENT_TOKEN_TO_BE_REPLACED