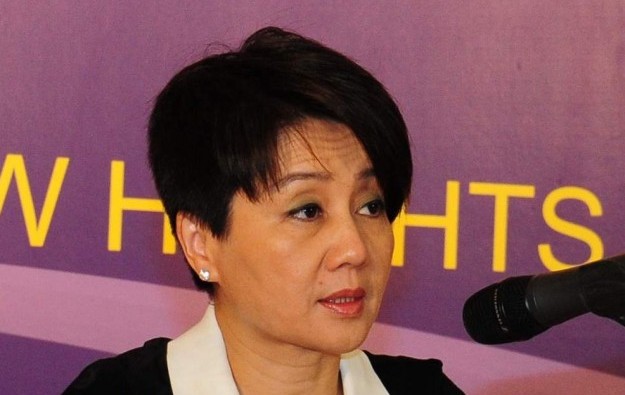 Macau Jockey Club casino – operating on a Sociedade de Jogos de Macau SA gaming licence – has had a soft reopening ahead of the Macau Derby, the premier horseracing event in the local calendar, which this year takes place later than usual on May 30. The casino had been closed since 2004.

The venue is a collaboration between Angela Leong On Kei (pictured) and Li Chi Keung, who is managing director of Macau Jockey Club. More significantly, according to Hong Kong Stock market filings, Mr Li is also a major investor in Macau junket operations.

He’s also related to the people that run Hong Kong-listed Kingston Financial Group Ltd, which in turn has a majority interest in SJM-licensed Grandview Hotel and its casino across the road from the jockey club.

Industry watchers can also throw into the mix a planned casino hotel project for that area called the Hollywood Roosevelt Hotel. It’s been linked with Ms Leong, fourth consort of Stanley Ho Hung Sun, a director of SJM Holdings Ltd and a three-term member of the Legislative Assembly.

The Hollywood Roosevelt also seems likely to be grandfathered on an SJM licence on the basis of a supposedly pre-existing service agreement.

All three properties will sit conveniently next to a planned public transport hub being constructed at Taipa that will include an interchange for buses and the planned Light Rail Transit system. That could drive mass-market traffic to a new casino mini-hub in a district that is primarily residential.

Last August the jockey club announced it was closing some loss-making off-site betting parlours in line with the Macau government’s policy on reducing or mitigating the effects of gambling by local people. Whether the jockey club’s revamped casino – dark for a decade – will be a locals venue or mainly for outsiders will probably depend on how it is marketed.

Gaming equipment supplier Paradise Entertainment Ltd, chaired by Jay Chun, announced recently that its unit LT (Macau) Ltd had won a service contract with the Macau Jockey Club casino. The parent company says LT Macau will provide the casino with sales, marketing, promotion, player development and referral, event coordination and other services. The contract entitles LT Macau to 55 percent of the net win from the jockey club casino’s live multi-game machines and chipless e-baccarat tables, and to 40 percent of the net win from the casino’s slot machines.

Macau casino operator MGM China Holdings Ltd had a “record” market share in January, and its venues were the “highest-earning businesses” in the portfolio of the majority owner MGM Resorts... END_OF_DOCUMENT_TOKEN_TO_BE_REPLACED