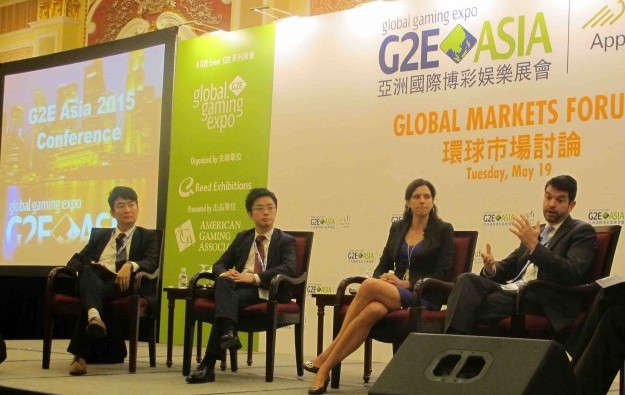 The fundamentals of South Korea’s gaming industry might change in the near future as international operators enter the market, suggested Won-Seok Seo (pictured left), professor at the College of Hotel and Tourism Management at Kyung Hee University.

Currently, according to Mr Won, “the proportion” of gambling via VIP promoters in South Korea is less than 10 percent in terms of revenue across the industry.

But new entrants – planning multi-billion U.S. dollar casino resorts – “might be more dependent on the VIP market, which means they will have to use junket promoters,” said Mr Won. The professor also heads the IR [Integrated Resort] Gaming Research Centre at Kyung Hee University.

“The problem in Korea is that we don’t have any regulation or law on junket operators. We need to look into how we can regulate and manage junket promoters,” he added.

Junket operators work as agents that recruit high roller players and, in some cases, run the VIP rooms in casinos. In Macau, they also extend credit to players, collect on losses and provide accommodation and other entertainment for the gamblers.

According to the University of Nevada, Las Vegas’ (UNLV) Center for Gaming Research, South Korea’s casinos are currently regulated by the country’s National Gambling Control Commission. But a least one local government in South Korea – Jeju Island, which has a special status from the national government – is said to be in the process of introducing new gaming legislation.

The Jeju provincial government has just approved a bill to set up a Casino Gaming Control Board, “aiming to increase transparency in the gaming industry,” said Mr Won. “At the same time, they announced they would implement a registration system for employees and junket promoters,” he said.

“I think it is a good move in terms of transparency in casino operations in Korea,” Mr Won added.

Jeju Island – popular with mainland Chinese holidaymakers – has also launched a study aimed at increasing the tax yield from the island’s casinos. There are currently eight operational casinos in Jeju.

International casino operators have shown interest in investing in either Jeju or near the capital Seoul’s Incheon International Airport. The operators include Genting Singapore Plc, Caesars Entertainment Corp and Philippines-based Bloomberry Resorts Corp.

South Korea’s national government plans to approve two more foreigners-only casino licences this year to boost tourism, with operators expected to invest at least KRW1 trillion (US$916.3 million) each. The government didn’t specify a location for the new licences.

South Korea currently has 16 casinos for foreigners-only and one for locals.

The project is subject to Mohegan Sun securing a gaming licence from South Korea’s Ministry of Culture, Sports and Tourism.

“We are moving on the assumption that locals will not be allowed in casinos,” the president of the Mohegan Sun Tribal Gaming Authority, Bobby Soper (pictured right), said at G2E Asia on Tuesday.

“Our business model assumes that we are going to build a resort for the locals on the non-gaming side,” he said, adding that the scheme will also cater to international visitors “both in the gaming and non-gaming components”.

Mr Soper added: “In relation to mass market, it’s really going to be driven by the non-gaming component… But there is a recognition that we are going to have to leverage junket business. We do that [junket business] to some degree now in our properties in the United States. Gaming [in South Korea] will primarily be driven by VIP.”