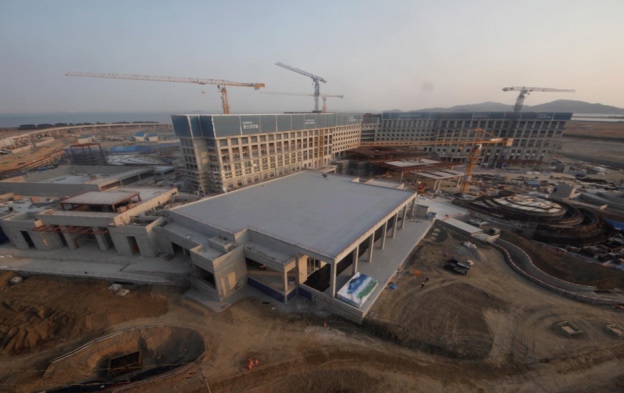 The first phase of Paradise City – a casino resort announced for Incheon, near South Korea’s capital Seoul – is scheduled to open in April 2017, said one of the project developers.

The announcement was made by South Korea’s foreigner-only casino operator Paradise Co Ltd in an update on the construction progress of the casino resort released on Wednesday. The document also included a photograph of the site (shown above) said to have been taken last month.

Paradise Co and Japanese pachinko operator Sega Sammy Holdings Inc are the developers of Paradise City. The project has been previously promoted as having a price ticket of more than US$1 billion.

The scheme – dubbed as South Korea’s first casino resort – broke ground in 2014. The development, with a total area of 330,000 square metres (3.55 million sq feet), is presented in its official website as featuring a foreigner-only casino with 160 live table games, 378 electronic table games and 350 slot machines.

The first phase of Paradise City will include the casino and hotel and convention facilities. The following stages will feature a spa, areas dedicated to culture and entertainment, and a boutique hotel, according to the project’s official website.

A total of three large-scale casino resorts have been announced for Incheon. Other projects in the pipeline include: the Inspire Integrated Resort scheme, by U.S.-based Mohegan Tribal Gaming Authority and South Korean chemicals manufacturer KCC Corp, scheduled to begin operations by 2020; and an unnamed project – for which construction has not yet started – by U.S. casino operator Caesars Entertainment Corp and Hong Kong-listed real estate developer Lippo Ltd.

Lippo said in a March filing it was in talks with Caesars Entertainment on a number of issues, including Lippo possibly disposing of its stake in the proposed Incheon scheme.

While Kangwon Land continues to see “solid growth” in its business, the foreigner-only casinos in South Korea saw aggregate gaming revenue decline by 10 percent in 2015, Fitch Ratings Inc stated in a March note. The rating agency said at the time that the negative performance was related to dwindling gambling volumes from Chinese players, influenced by mainland China’s ongoing corruption crackdown and slowing economy.

Macau’s casino gross gaming revenue (GGR) for the first five days of February is estimated at MOP1.9 billion (US$235.1 million) – or MOP380 million per day – a level that suggests a “45... END_OF_DOCUMENT_TOKEN_TO_BE_REPLACED