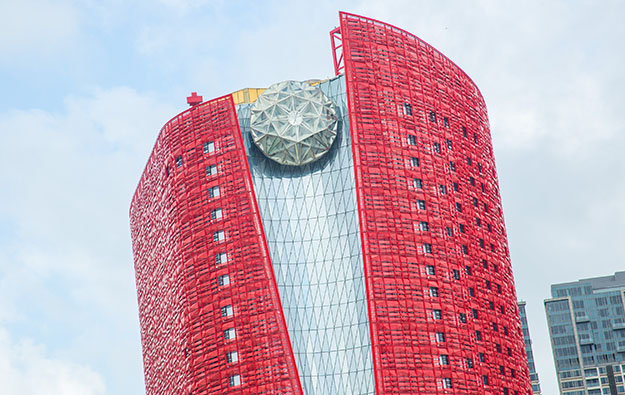 The management of Hong Kong-listed South Shore Holdings Ltd says there is “material uncertainty” that “may cast significant doubt” on the group’s ability to continue operations, as the company net loss increased sharply in its financial first half.

South Shore is promoter of The 13 Hotel (pictured), a new property located on the border between Coloane and the casino district of Cotai in Macau. The venue had a partial opening on August 31. The firm aspires to have a casino at the property.

The company reported on Tuesday a net loss of nearly HKD442.4 million (US$56.5 million) for the six months ended September 30. That compares with HKD23 million in the prior-year period. The firm said its net loss rose mainly due to an “increase in finance costs, depreciation and amortisation charges and hotel operation expenses for the hotel segment”.

The mounting loss was despite a 44.3-percent increase in revenue for the reporting period, to HKD4.44 billion. The firm’s expenses however grew by 45 percent year-on-year, to HKD4.26 billion.

“As at 30 September 2018, deposits of HKD179 million were received pursuant to the sale and purchase agreements. The completion of the disposal is subject to the fulfilment of certain conditions,” said the parent company on Tuesday.

The hotel segment recorded a loss of approximately HKD425 million for the six months to September 30.

Tuesday’s filing to the Hong Kong Stock Exchange said that as of September 30, South Shore’s current liabilities exceeded its current assets by nearly HKD3.87 billion. The group’s total bank and other borrowings amounted to about HKD4.11 billion, of which nearly HKD4.09 billion were classified as current liabilities, it added.

Additionally, the company had contracted capital commitments not provided for in the consolidated results, amounting to HKD46.6 million.

According to the latest filing, the group had not complied with certain covenants in respect of bank borrowings in the amount of HKD2.94 billion, as stipulated in the bank loan agreement which require The 13 Hotel to have the official opened no later than March 31, 2017, subsequently extended to July 31, 2017.

South Shore said in Tuesday’s filing: “The group has applied for a further extension of the hotel opening date to 31 August 2018 due to the further delay in the hotel opening … As at the date of this report, such extension and waiver for the non-compliance of the covenants as stated in the bank loan agreement, is being processed by the bank.”

“As a result, as at the date of this report, such bank borrowings are repayable on demand,” it added.

South Shore’s management said in the latest filing that it believes that the group will have “sufficient working capital” to finance its operations and to pay its financial obligations, assuming the financing plans and measures “can be successfully executed”.

“However, the likelihood of the successful implementation of these financing plans and measures could not be determined as at the date of this report,” it added.