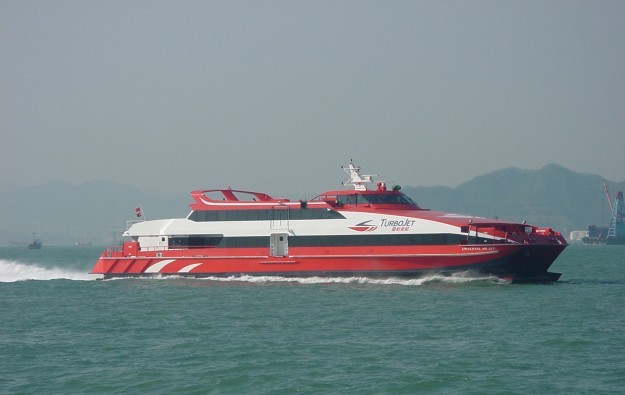 Any increase therefore in the time spent aboard the ferries that bring many people (40 percent of all April visitors) to Macau is potentially less time spent on gambling in the casinos.

The news last week of a second serious accident in six months involving a TurboJET ferry could have an impact on the casinos’ top line and ultimately the bottom line, if the ferry operators are forced to reduce their speed at either end of the journey, where the waterways are most crowded with traffic.

In the earlier incident in late November last year, at least 85 people were injured when one of TurboJET’s ferries hit an “unidentified object” in waters near one of Hong Kong’s outlying islands.

Although the Hong Kong end of the journey has the most maritime congestion, there was also an incident in Macau in December 2012 when 26 people were injured after a Hong Kong-bound TurboJET service collided with a marker buoy in sea-lanes off Macau Outer Harbour Ferry Terminal.

GGRAsia approached both the Marine and Water Bureau in Macau, and Hong Kong’s Marine Department, to ask what the current ferry speed limits are, and whether as a result of last week’s accident, the speed limits were under review.

Macau officials told us that according to the department’s Official Order No. 1/98, the speed limit for “high speed crafts” is 12 knots (22 kilometres per hour or 14 miles per hour) or below in port basins, and on the fairways of the Outer Harbour and Taipa (serving the Pac On Ferry Terminal) it is 35 knots or below.

The bureau added in an emailed statement: “However, the Marine and Water Bureau will take into consideration the sea conditions or weather situations and inform the high speed crafts of the change in speed limit via the Macao Vessel Traffic Control Centre.”

Hong Kong’s Marine Department told GGRAsia: “Regarding the incidents on November 29, 2013 and May 21, 2014, the cases are still under investigation and the Marine Department will continue to closely monitor the traffic in the Hong Kong waters.”

The Marine Department added that the maximum speed in Victoria Harbour is 15 knots per hour, except “within the boundaries of the Southern, Northern and North Green Island Fairways where the maximum permitted speed is 35 knots”.

The distance from Hong Kong to Macau is approximately 40 miles, so in order for the ferry to complete the journey in an hour (roughly the current journey time) it would need to maintain an average speed of approximately 35 knots.

A few minutes of extra journey time per potential casino customer may not sound much, but when spread over the high volumes of visitors unique to Macau, it all adds up. For example, in April, there were 585,824 Hong Kong residents visiting Macau, or an average of 19,527 per day according to the statistics service. Most of those will have arrived by ferry, and many of them are likely to have engaged in some casino gambling based on historic trends.

So if every Hong Kong visitor spends an extra minute on the inward ferry, that is potentially one fewer of the precious 288 minutes (60 x 4.8 hours) that the average day tripper spends in the territory.