Spintec in talks to introduce multi-game system to Macau 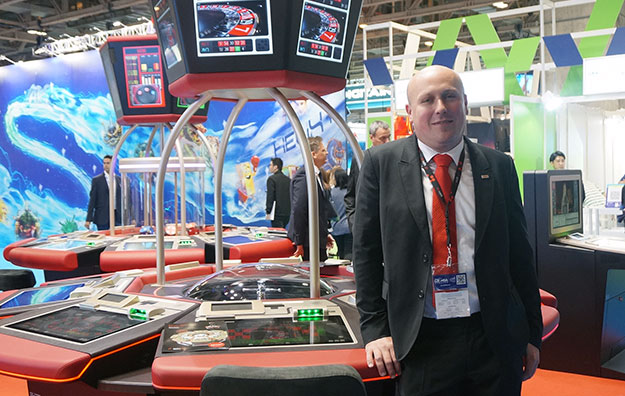 “Now Macau is opening up to this kind of equipment, so shortly we should have two or three installations,” Mr Krševan (pictured) told GGRAsia.

He was speaking on the sidelines of the Global Gaming Expo (G2E) Asia 2018, a casino industry trade exhibition and conference that began today (Tuesday) in Macau.

The Slovenia-based firm is pushing to promote its new multi-game system in Asia, following successful installations in Europe.

“It’s going to be another challenge,” admitted Mr Krševan. However, he said he was confident the versatility of its multi-game amphitheatre – which can include virtual, automatic or live roulette, baccarat or sic bo – will appeal to Asian operators.

In Macau, Spintec is particularly known for its eight-seat automated roulette product, part of its Karma Roulette line. Late last year it also received regulatory approval to deploy a sister version of the product featuring sic bo to casino floors in Macau.

“We already have four machines, at Venetian, Sands and Grand Lisboa, now we’re hoping to expand it a little bit,” said Mr Krševan.

Spintec is bringing the second generation of its Karma line to G2E Asia as well. “Technically it’s still the same, very stable, but it’s more flashy, with bigger screens and a modern design,” said the company representative. Mr Krševan said he hoped to repeat the success of the first Karma generation, by placing the first machines until Autumn.

Before that, Spintec is aiming to enter the Australian market, its main expansion target for 2018. “We have already signed the first deal but we are still waiting for regulatory approval. We expect to have the products in place by July,” said Mr Krševan.

After a strong performance in Asia during 2017, with the firm entering several new markets, Spintec is now “expanding slowly into Vietnam, Cambodia and Laos,” said the regional sales manager. The company has just placed it first machine in South Korea, with “a couple more” on the way, Mr Krševan added.