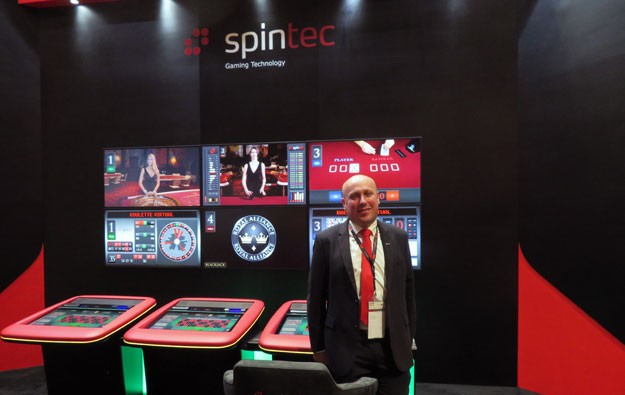 Spintec d.o.o., a Slovenia-based maker of electronic table games for casinos, has had a “very positive year” in terms of deals in Asia, says the firm’s regional sales manager Primoz Krsevan (pictured).

“We’ve been able to expand this year in Macau, South Korea and especially in Vietnam, and we have very good prospects for next year,” Mr Krsevan said in an interview with GGRAsia at the MGS Entertainment Show 2019. The trade show is being held at the Venetian Macao from Tuesday to Thursday.

Mr Krsevan noted that the Asian markets represented about “50 percent” of all deals for the company so far in 2019 worldwide, adding that there was room for growth in coming years. Asian markets are some of the fastest growing in casino gaming business in terms of consumer demand and equipment supply, according to investment analysts.

The executive said he expected Spintec to continue expanding in Asia, specifically in markets like Vietnam and the Philippines. “I think next year we will be able to deliver on some big deals” in the Philippine market, said Mr Krsevan.

The sales executive said the company’s expansion seen so far had been linked to its ability to respond quickly to feedback and adapt its products to the various markets in Asia. “We try to modify the products to fit each particular market and consumers’ preferences,” he explained.

Mr Krsevan was speaking on a shared stand organised by Spintec’s local distributor, Asia Pioneer Entertainment Ltd (APE). The executive highlighted that the collaboration with APE was fruitful, as the latter company was “doing a great job in providing support” to Spintec’s products, but also providing “advice on the best strategies” for each specific market in Asia.

The table games supplier is highlighting its Aura Multigame amphitheatre at this year’s MGS Entertainment Show. Spintec describes its Aura gaming terminals as “ideal” for what it termed “amphitheatre” setups – sometimes also referred to in the industry as “stadium” configurations – whereby multiple gaming terminals can be arranged in a horseshoe pattern on the casino floor.

“The amphitheatre is performing well in the venues where we have installed them, especially in Vietnam and Australia,” said Mr Krsevan, adding that in the Macau market it will “still take some time” to reach the expected results.

Some Macau casinos visited by GGRAsia on Thursday, actually had tables that were closed, notwithstanding strong consumer demand during Chinese New Year (CNY). The reasons for some tables being... END_OF_DOCUMENT_TOKEN_TO_BE_REPLACED