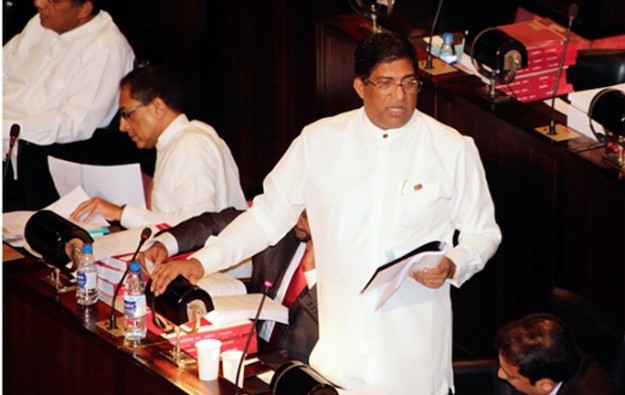 The government of Sri Lanka wants to remove a casino entry levy announced earlier this year, the country’s Minister of Finance, Ravi Karunanayake, said last week. Mr Karunanayake made the announcement while presenting the country’s budget for 2016 in the parliament (pictured).

“The present entry fee of US$100 per person who enters casino entertainment will be removed,” states the budget proposal.

The entry fee provision was gazetted on March 30. But it had not yet been activated pending a parliamentary confirmation, according to media reports.

However, “the present annual levy of LKR200 million [US$1.4 million] for carrying on the business of casino will be increased to LKR400 million per year,” according to the budget proposal.

In addition, the government is seeking to impose a surtax of 25 percent of income tax liability on gaming profits.

“To avoid any undue benefit by tobacco, liquor and casino industries from corporate tax revisions and keeping in line with government policy of creating a society free of tobacco, liquor and betting and gaming, I propose to impose a surtax at the rate of 25 percent of income tax liability,” Mr Karunanayake told the parliament.

The minister also stated that an area in the capital of Sri Lanka, Colombo, earmarked for casino development by the previous government would be used instead to establish an international financial centre.

“We expect that this initiative will convert the infamous casino proposal of the former government into a robust venture of a financial centre which will be creating a number of new employment opportunities,” he stated.

Among the projects affected was Crown Resorts Ltd’s proposal for gaming in a US$400-million resort in Colombo. Australia’s Crown Resorts, controlled by gaming entrepreneur James Packer, is a joint venture partner in the Melco Crown Entertainment Ltd casino development business operating in Macau and the Philippines.

Mr Sirisena’s government announced earlier this year a one-time special tax of LKR1 billion to be levied on each of Sri Lanka’s existing four casinos. The tax was included in the country’s 2015 interim budget.

Macau is to create distinct zones on its casino floors and designated gambling chips that will be solely for the use of players from overseas. The moves will be part of a new gaming tax system to... END_OF_DOCUMENT_TOKEN_TO_BE_REPLACED