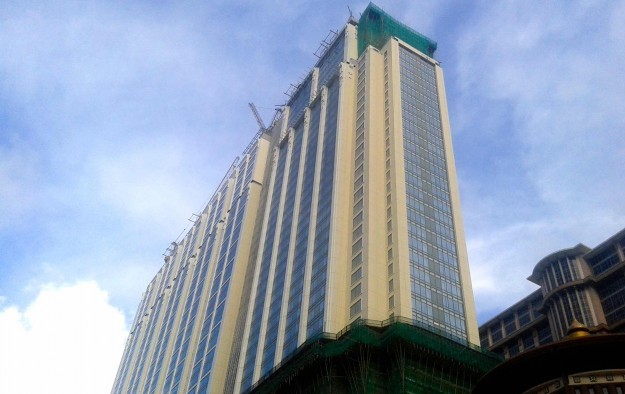 The St. Regis Macao, the fourth and final tower of the Sands Cotai Central casino resort complex in Macau, is scheduled to open on December 17. The property, developed by Sands China Ltd, is designed for business travellers and luxury-minded travellers and families, said the hotel’s public relations team. St. Regis Macao (pictured) will feature 400 guest rooms and suites.

“The hotel will officially open on 17 December 2015 and we are now ready to receive reservations through our direct booking channels,” Karen Kang, director of public relations at St. Regis Macao, confirmed in an email to GGRAsia.

The hotel’s website previously mentioned December 1 as the opening date.

In the interim report filed with the Hong Kong Stock Exchange this month, Sands China said “the hotel and mixed-use tower under the St. Regis brand … is expected to open at the end of 2015”. The firm additionally said the total budget to complete the project was expected to be “approximately US$380 million”.

“We are thrilled to bring the St. Regis to Macau,” Daniella Tonetto, general manager of sales and marketing for St. Regis Macao, was quoted saying in the release. “We believe we are perfectly positioned to cater to a new generation of both leisure and corporate travellers who seek a differentiated experience,” Ms Tonetto added.

Sands China, which also owns the Venetian Macao, is currently developing another casino resort on Cotai. The US$2.7-billion Parisian Macao – featuring a scale replica of the Eiffel Tower – will include a casino and 3,000 rooms and suites, as well as shops, entertainment and meeting facilities.

In its interim report, the firm said it anticipates opening the Parisian Macao “in the second half of 2016, subject to Macau government approval”.

Under the current land concession, the Parisian Macao casino resort should be completed by April 2016. But Sands China said in its latest report that it has applied for an extension from the Macau government to complete the Parisian Macao, “as the company believes it will be unable to meet the April 2016 deadline”.

Some Macau casinos visited by GGRAsia on Thursday, actually had tables that were closed, notwithstanding strong consumer demand during Chinese New Year (CNY). The reasons for some tables being... END_OF_DOCUMENT_TOKEN_TO_BE_REPLACED