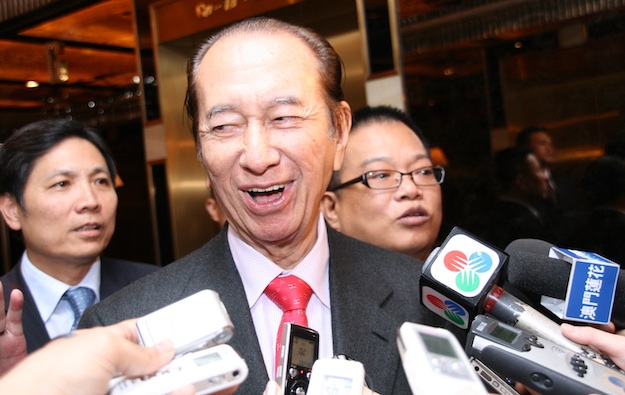 Mr Ho was the founder of SJM Holdings Ltd, one of Macau’s current six casino concessionaires.

He was said to have been in poor health since 2009 following a reported fall at his Hong Kong home.

When a major investor in a high-profile industry dies, the issue arises of what legacy the person leaves, beyond money and other assets. In the case of Stanley Ho, the legacy is clear and current.

Mr Ho’s life story was not entirely one of riches to rags and back to riches, but – unlike some of those born into privilege – he seems to have had the stomach and will to make a comeback after early adversity.

He was born in the then-British colony of Hong Kong in the early 20th century, a great-nephew of one of Asia’s first tycoons, Robert Ho Tung, a Eurasian who was among Hong Kong’s wealthiest individuals at the turn of that century.

Stanley Ho’s father, Ho Sai Kwong, worked as a comprador – essentially a go-between – on behalf of the influential Sassoon family of Hong Kong merchants in its dealings with Chinese traders. That mirrored Stanley Ho’s later role between two worlds – the Western one of formal banking systems and rules and regulations, and the more network-based business culture of the East.

After Stanley Ho’s father reportedly fell on hard times, his son exhibited some of the more swashbuckling tendencies in his heritage, reportedly making money during the Second World War by trading essential commodities out of neutral, Portuguese-administered Macau, into Hong Kong, at that time occupied by the Japanese.

He reportedly set up a kerosene company in 1943 and was said to have benefited from the post-war construction boom in Hong Kong. In 1962, Stanley Ho invested his profits to win monopoly gaming rights in Macau, as part of a consortium that introduced Western-style gambling and improved transport between the city and Hong Kong. The businessmen founded Sociedade de Turismo e Diversões de Macao SA – also known as STDM – that ran as a monopoly concession granted by the Macau authorities for a period spanning 1962 to 2002.

Stanley Ho, who was often quoted saying he never indulged in gambling, founded a gaming operation that runs casinos, horse betting and lotteries in Macau.

Six decades later, four of his 17 offspring were occupying leading positions in publicly-listed companies controlling three of Macau’s six current licensed casino operators. In addition, two of Stanley Ho’s consorts – the third and the fourth – are executive directors of SJM Holdings Ltd, one of the existing Macau operators and the successor to STDM.

Access to the original Macau monopoly gave the legacy STDM business certain obligations to the then Portuguese administration in Macau with regard to creating local infrastructure.

On one level such commitment could be seen as a drag on the core gaming business during the monopoly years, but on another level it could also be seen as putting the Ho family in the driving seat with regard to it getting some of the spoils from the city’s future development.

Macau’s main commercial port at Ka Ho, in Coloane, was developed by STDM, although the Macau government now owns it.

To this day SJM Holdings pays a lower level of effective tax on its casino gross gaming revenue – 38 percent – compared to the other operators on 39 percent, to account for the cost of a legacy commitment to conduct dredging work to keep open Macau’s maritime channels.

The TurboJET fleet of fast catamarans that dominates the market for ferry services between Hong Kong and Macau is controlled by Shun Tak Holdings, a Hong Kong-listed firm Stanley Ho founded. When the Hong Kong-Zhuhai-Macau Bridge opened in October 2018, a Shun Tak subsidiary was among the shareholders of a consortium operating bus services on the bridge.

Stanley Ho has also cast a long shadow in terms of a long and drawn out succession for control of his empire. He officially retired from SJM Holdings and STDM in 2018, but in reality his hands-on involvement in the businesses ended in July 2009 after a reported fall at home in Hong Kong.

The succession issue made world news in 2011 when it was alleged that his second consort, Lucina Laam King Ying, mother of three of his children involved in the Macau casino sector – Daisy Ho Chiu Fung, Pansy Ho Chiu King and Lawrence Ho Yau Lung – had colluded with his third consort, Ina Chan Un Chan, to take over Lanceford Co Ltd, a holding company that controlled the bulk of his assets, and at the time held the largest single stake in STDM. They refuted the suggestions.

The described peace deal that followed the reported power struggle is said to have guaranteed a role in the family empire for Angela Leong On Kei, Stanley Ho’s fourth consort and mother of his youngest children.

The announcement in late January 2019 that interests controlled by Pansy Ho and interests controlled by the Henry Fok Foundation were joining in alliance to guarantee a majority control of STDM and therefore of SJM Holdings Ltd looks in hindsight like the playing out of a political endgame for a new world without the grand old man of Macau gaming.

Together Pansy Ho and the Henry Fok Foundation – named after another founder of STDM – control approximately 53.012 percent of STDM’s issued shares, according to a Hong Kong filing at the time by Shun Tak Holdings.

Controlling a Chinese-founded firm, STDM, that had been the incumbent Macau casino operator at the start of the modern era – and latterly SJM Holdings – also earned Stanley Ho and his business empire long-standing links with Macau’s local power brokers. When SJM Holdings hosts a Chinese New Year Eve banquet each year, the attendees typically include the city’s Chief Executive and the head of the city’s gaming regulator.

This year’s dinner was cancelled due to the Covid-19 pandemic. But last year’s banquet included the playing of extended video clips – recorded more than a decade ago according to company sources – of a beaming Stanley Ho in a series of monologues. They included jokes that drew laughter – whether merely polite or spontaneous – from the dinner guests. In hindsight, it might have been SJM Holdings’ way of getting its founder to say goodbye.

In Portugal, the historical connections between Portugal and Macau have played out via Estoril-Sol SGPS SA, a business led by Stanley Ho that runs three casinos, in Estoril, Lisbon and Póvoa de Varzim.

Other markets touched by the Ho business empire were more exotic and unusual. It was widely reported in the international media that in 1999 Stanley Ho opened a new casino – inside a ziggurat-shaped building called the Ryugyong Hotel – in Pyongyang, the capital of North Korea.

A key topic regarding Stanley Ho’s legacy is in what kind of condition has he left the group of companies he founded when it comes to a new public tender process for Macau gaming rights. Sociedade de Jogos de Macau SA – the unit of Hong Kong-listed SJM Holdings that holds the Macau concession – will see its current rights expire in 2022.

Notwithstanding the alliance between Pansy Ho and the Fok Foundation announced last year, a number of investment analysts has cast doubts on whether – with a legacy of so many different consorts and offspring in Stanley Ho’s clan – a clear direction can be maintained in terms of running SJM Holdings, and in terms of maintaining a competitive presence in the Macau market into the third decade of the 21st century.

Macau recorded 965 “gaming-related” crimes in full-year 2022, down 29.7 percent on the 1,372 identified in the previous year, according to the latest statistics published on Tuesday by... END_OF_DOCUMENT_TOKEN_TO_BE_REPLACED