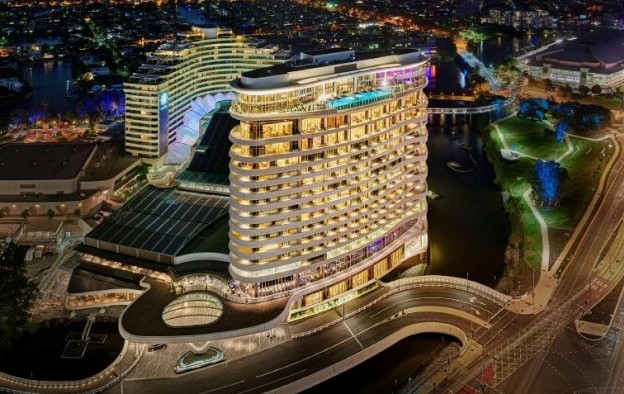 Australian casino operator The Star Entertainment Group Ltd has unveiled a plan to invest billions of dollars on the Gold Coast as it tries to convince the Queensland state government to abandon plans to allow a second – competing – casino in the city.

Chairman Mr O’Neill said the firm had a three-pronged proposal: one part was to realise “in stages” a AUD2-billion (US$1.37 billion) master plan, including five additional towers on top of the existing The Star Grand and The Darling complex (pictured) on the Gold Coast, a place that thanks to rapid urban development has become a city authority in its own right .

Another part of the casino firm’s proposal involved a major revamp of Star Entertainment’s Sheraton Grand Mirage resort on the Gold Coast, which might include a low-rise development with tourism and residential elements. The other part of the proposal involved a AUD100-million revamp of the Gold Coast Convention and Exhibition Centre, a facility built on state-owned land but which would be operated by Star Entertainment after renovation.

In his Thursday address to the firm’s shareholders, Mr O’Neill stated: “Obviously, this level of commitment to the Gold Coast from The Star would require exclusivity arrangements which we would similarly discuss with [the Queensland] government.”

He added: “The Star’s position has always been – we support investment in tourism assets on the Gold Coast – but the Gold Coast market is too small for two casinos.

“The introduction of another local casino competitor would force us to defend our local market share at the expense of driving incremental inter-state and international tourism.”

Mr O’Neill said additionally that the company was sharing its “unilateral commitment” for investment “in return for certainty around maintaining the Gold Coast as a one casino city – just like Brisbane.”

Star Entertainment owns and operates The Star Sydney casino hotel in New South Wales, and two other gaming venues in the state of Queensland, the Star Gold Coast and the Treasury Casino and Hotel Brisbane.

The casino operator and its partners are also developing the Queen’s Wharf Brisbane casino resort scheme in Brisbane, the capital city of the state of Queensland. The AUD3.6-billion project will have a phased opening, starting in the second half of 2022.

According to Thursday’s announcement, the investments on the Gold Coast will likely “grow gaming tax revenues” for the Queensland government.

“We would suggest a portion of gaming tax revenues from the Star Gold Coast operations each year could be reserved to secure, promote and market new events, conventions and shows [at the Gold Coast Convention and Exhibition Centre],” said Mr O’Neill.

He added: “We propose the fund be managed by Tourism and Events Queensland with participation from The Star.”

In Sydney, the Star Entertainment is also hoping for a positive outcome from the New South Wales government’s Independent Planning Commission over its proposal for a new hotel tower, to be operated by the Ritz-Carlton.

“Our attempts to boost tourism through the construction of a Ritz-Carlton hotel and apartments met with a disappointing recommendation to reject from the Department of Planning,” Mr O’Neill said in its Thursday address.

He added: “We can only hope the challenges we have faced trying to secure approval do not translate into an opportunity missed for Australian tourism.”

The Macau government announced on Tuesday tightening of its Covid-19 testing requirements for front-line casino staff, halving the interval between nucleic acid tests to every two days, from every... END_OF_DOCUMENT_TOKEN_TO_BE_REPLACED