Stephen Hung leaves board of The 13 Holdings 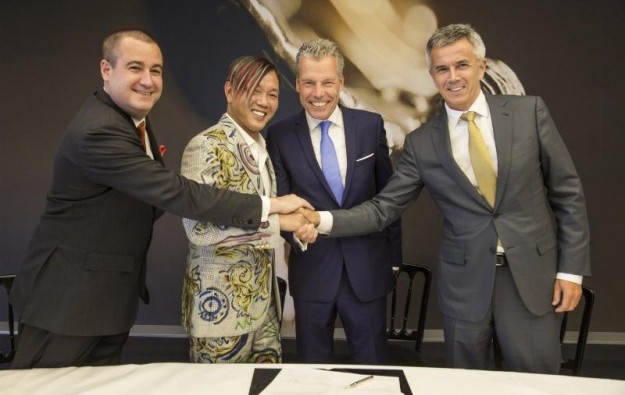 Entrepreneur Stephen Hung (pictured second left) has resigned as joint chairman and executive director of The 13 Holdings Ltd, the promoter of a hotel scheme on the border of Cotai and Coloane in Macau.

The news was given in a Thursday filing to the Hong Kong Stock Exchange. Rumours of Mr Hung’s imminent departure had swirled for months, amid delays to The 13 Hotel’s launch, question marks over completion of its funding, and speculation about exactly which of Macau’s six casino operators might provide the gaming licence for the on-site casino sought by the promoters.

The 13 Hotel’s initial market positioning – with an average construction cost per room of more than US$7 million according to company statements, and a US$20-million order for a fleet of Rolls-Royce Phantom limousines painted in bright red livery – put it in the super luxury bracket, at a time when China’s government was engaged in a crackdown on graft and ostentatious spending among Communist Party cadres and the public.

On Tuesday, the hotel’s promoters announced a further delay of at least a month – to “on or before” April 30, 2018 – for the launch of its accommodation.

But The 13 Holdings added that a pending rights issue for further funding would be “fully underwritten and it is expected that the proceeds from the rights issue will be sufficient for completion of The 13 Hotel”.

The company had also noted in its Tuesday announcement: “The authorisation to install and operate a casino in The 13 Hotel is subject to the approval of the Macau government, and therefore its success remains an uncertainty.”

A second Thursday filing said that Peter Coker was now chairman of The 13 Holdings.

The earlier Thursday filing announcing Mr Hung’s departure, said that Pride Wisdom Group Ltd – a company previously described in filings from The 13 Holdings as being jointly owned by Stephen Hung with others – was transferring, via a sales and purchase agreement, nearly 82.5 million shares of The 13 Holdings – representing approximately 8.96 percent of its issued capital – to a firm wholly owned by the group’s deputy chairman Tom Lau Ko Yuen.

Macau’s casino gross gaming revenue (GGR) for the first five days of February is estimated at MOP1.9 billion (US$235.1 million) – or MOP380 million per day – a level that suggests a “45... END_OF_DOCUMENT_TOKEN_TO_BE_REPLACED