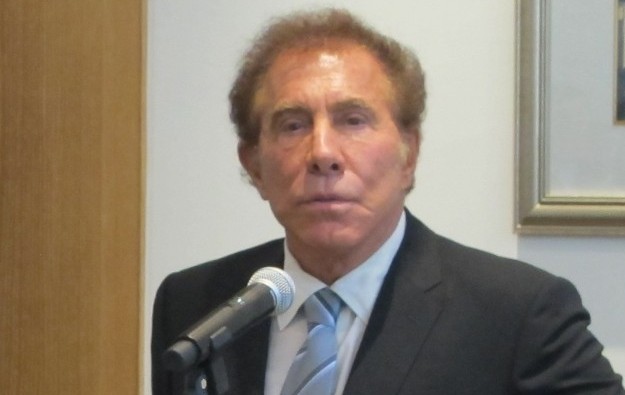 Steve Wynn (pictured), chairman and chief executive of casino operator Wynn Resorts Ltd, on Tuesday said he is not worried with the gaming market slowdown in Macau.

“I am not concerned,” Mr Wynn told reporters in Macau. “You can quote me as bullish on Macau.”

“We are ahead of where we were last year in my company,” he pointed out.

But GGR for the first eight months of 2014 is still up by 8.1 percent compared to the same period last year. Several gaming analysts have recently cut their estimates for 2014, pointing also to the possibility of a slower-than-expected growth next year.

Mr Wynn however called the current slowdown “an adjustment”.

He added: “When you see that kind of adjustment, you adjust your business. You take tables away from VIP and put them into mass or premium mass.”

U.S.-based Wynn Resorts is the parent of Macau-based gaming operator Wynn Macau Ltd, which operates Wynn Macau casino hotel. The company is building a new casino resort in Cotai, Macau’s answer to the Las Vegas Strip. The property is on track to open on time for the Chinese New Year of 2016, in February, Mr Wynn reiterated on Tuesday.

Other developers of casino resorts in Cotai are facing problems with getting construction licences on time. Sands China Ltd has recently said in filings that it has been waiting on government permits for certain Cotai construction works. MGM China Holdings Ltd mentioned question marks over timing of project openings linked to receipt of government permits. The firm’s MGM Cotai project is scheduled to open in 2016.

Mr Wynn said he was also very bullish on the positive impact in Macau of the development of Hengqin Island as an international tourism destination. Combined, Macau and Hengqin will become one of the “most powerful destination resort areas” in the world by 2020, he pointed out.

Despite the optimism, Mr Wynn said his company had no plans to invest in Hengqin. “But that could change in the future,” he added.

Rival Macau gaming operator Galaxy Entertainment Group Ltd announced earlier this year it would invest RMB10 billion (US$1.6 billion) on a non-gaming tourism-related project in Hengqin. The company has yet to disclose further details on the plan.

Mr Wynn also said that Macau’s corruption watchdog was “totally satisfied” with the information provided by the company about a deal connected to the granting process of the land where Wynn Palace is being built.

Vasco Fong Man Chong, head of Macau’s Commission Against Corruption, in July confirmed that the commission was gathering information about a deal surrounding the Cotai land granted to Wynn Macau, prior to the official concession of the plot to the gaming operator.

Asked if the investigation was completed, Mr Wynn replied: “I think so.”

Commenting on the recent labour protests impacting Macau’s gaming industry, with workers demanding better pay and promotion policies, Mr Wynn said the employees at his firm were satisfied with wages and benefits, adding that the company had the lowest turnover rate in the sector.

“My employees are pretty happy,” he pointed out. “I, personally, am not having any trouble with demonstrations at my company.”

Mr Wynn did mention concerns about staffing the upcoming casino resorts under construction in Cotai. “What we need to resolve are uncertainties,” he said.

“My outfit is spending over US$4 billion on Wynn Palace. Are we going to have enough employees to run the place?” he questioned. “Once you employ everybody in Macau… you are going to have to bring people from outside the region. Or we are going to have empty buildings and other problems that will be negative to this community.”

Mr Wynn however stressed he was confident the Macau government would deal with the labour issues successfully. “The government has never left us abandoned.”

Mr Wynn again expressed interest to invest in Japan if casino gaming is allowed in the country.

“I am certainly interested in Japan… If the time comes when Japan is available, we will step up and bring our capital, our experience, our imagination to the table,” he said.

The Cabinet Committee of Japan’s lower parliamentary chamber started discussions in June on a bill to legalise casino gaming. However, the Japanese parliament is currently in recess.

Mr Wynn’s comments to the press came after a talk at the University of Macau on the impact of tourism on the city. Asked by the University of Macau rector, Wei Zhao, about which direction Macau should follow to diversify its economy away from gaming and tourism, Mr Wynn said the state of Nevada, in the United States – where Las Vegas is located –, had been facing the same issue for decades.

“The energy of the resort and convention business is going to dominate the development of this community. That doesn’t mean that the government will not encourage other developments,” he said.

The Macau government has repeatedly pledged to promote economic diversification, but has yet to achieve any significant results.

Mr Wynn added: “There are many things that happen in conjunction with our industry… We are certainly customers of all services industries… All kinds of businesses pop up because of the tourism [sector]”.

Macau’s Chief Executive Fernando Chui Sai On, who was re-elected last month for a second five-year term, wrote in his political manifesto that gaming operators should give priority to local companies regarding product and service procurement.

Mr Chui’s manifesto also mentioned casino operators should provide housing and transportation to their migrant workers. But Ian Coughlan, executive director of Hong Kong-listed Wynn Macau, on Tuesday said the company had not yet been approached by the government on this matter. He added that the firm already provided dormitory accommodation and transportation to its migrant workers.

Macau casino operator MGM China Holdings Ltd had a “record” market share in January, and its venues were the “highest-earning businesses” in the portfolio of the majority owner MGM Resorts... END_OF_DOCUMENT_TOKEN_TO_BE_REPLACED