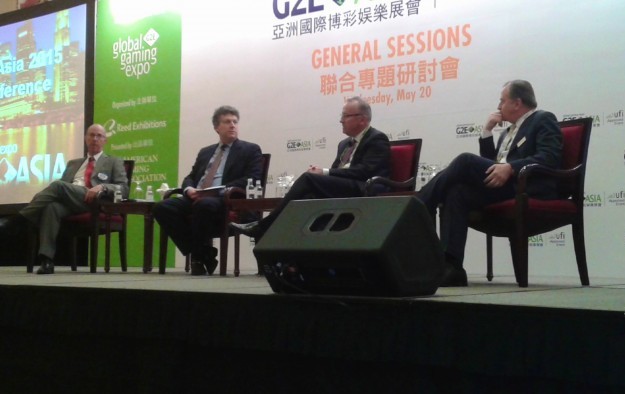 Despite the recent multi billion U.S. dollar mergers and acquisitions in the casino technology supply industry there is still room for smaller companies to act as suppliers, a conference session of Global Gaming Expo (G2E) Asia 2015 heard on Wednesday.

Those opportunities can often come via sale – by independent companies – of game software to the newly enlarged firms. The super-sized businesses now offer multiple channels for such content – including casino games, lottery products, mobile software applications and social games. The big firms are on the lookout for original content by small companies – that might on occasions be more nimble at responding to market trends than their bigger cousins – the session heard.

The panel was composed of chief officers from Scientific Games Corp, Aristocrat Leisure Ltd and IGT Plc, that between them are responsible for nearly US$15-billion worth of leveraged buyout deals in the casino supply sector since 2013.

The executives however warned there were also significant risks for smaller firms.

Mr Bugno, came from the GTech SpA side of the business prior to its April 7 merger with Nevada-based International Game Technology. Before that, Mr Bugno was with the German brand Spielo which was taken over by GTech.

He said in Wednesday’s session: “When Spielo was a business in its own right, three years ago we took a program to launch 3D [products]. It ended up proving to be a fantastic product. At Spielo there was huge risk [to do that] as we would follow technology and try to develop the next technology and we got it right. Spielo was just a small gaming company, and if we could do it, so could many others.”

But he stated: “The big advantage we would have [as a larger company] is that we could take the risk in a more calculated way, without effectively betting the bank. Smaller companies have a higher level of risk, and you need to adapt your processes to say ‘I need to really focus on how many targets I am going to hit,’ to make sure you reduce the chance of missing. It doesn’t mean a small company can’t have big successes. It hasn’t meant that in any other industry and it won’t mean it in this.”

“To invest in a small company – that’s got a good game – in any meaningful way, you have to be satisfied that they are going to invest in their R&D [research and development] and have more content and more development that will support that cabinet going forward,” stated Mr Isaacs.

The executive added: “The old way of using a cabinet for five years and then throwing it away doesn’t work any more. These days the customers [casinos] would like to keep the cabinet on the floor for a hundred years – let’s be realistic, maybe ten [years].”

Mr Isaacs said that in the North America markets among perhaps 26 manufacturers, “20 of them are leasing the games [to the casinos] because the customers [casinos] aren’t prepared to put the capital in”.

Jamie Odell (pictured centre right), chief executive of Aristocrat Leisure – which in October confirmed it had acquired U.S.-based gaming machine manufacturer Video Gaming Technologies Inc, in a deal worth US$1.28 billion – told the panel session: “I think there’s absolutely an opening for the small guys… They do things faster than big organisations. We encourage the small innovators supported by our technology…”

The US$6.4-billion GTech-IGT deal was completed on April 7, with the launch of IGT Plc’s shares on Nasdaq.