Still time for my son to help family: Kazuo Okada 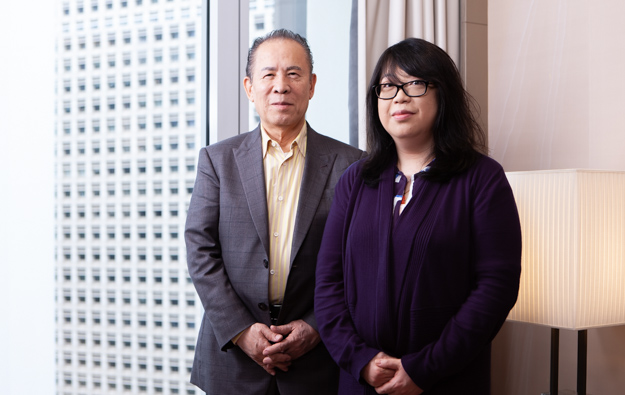 A key to entrepreneur Kazuo Okada reasserting control over Universal Entertainment Corp, the Japanese gaming conglomerate he founded, and of its unit Tiger Resort, Leisure and Entertainment Inc, the promoter of the Okada Manila casino resort in the Philippines, is to regain the support of his son Tomohiro Okada, the businessman told GGRAsia in an interview.

Kazuo Okada was removed from the board of Universal Entertainment last year, after being accused by the firm’s current management of “three acts of fraudulence” outlined in what the company said was an independently-commissioned investigation. A fortnight ago Kazuo Okada was detained for a short period in Hong Kong by the city’s Independent Commission Against Corruption (ICAC). GGRAsia understands the event was linked to Kazuo Okada’s dispute with Universal Entertainment, but his side has declined to comment on the detail, citing legal reasons.

Kazuo Okada (pictured left) has been spending time in Hong Kong and has been engaged in legal moves there centring on efforts to assert control over Okada Holdings Ltd, a private Hong Kong-registered entity owning 69 percent of Universal Entertainment. The latter in turn controls Tiger Resort.

Okada Holdings was set up with the following shareholders: Kazuo Okada; his wife; Tomohiro Okada his son; and Hiromi Okada (pictured right) his daughter, with the businessman as sole director, he told GGRAsia.

Tomohiro is currently estranged from his father, and has also nominated two other people as directors of Okada Holdings. These factors have played a role in preventing Kazuo Okada from exercising control over Okada Holdings in the way he had originally envisaged.

“If you ask who is controlling this company now, I would say my control was fraudulently taken away from me and I am now doing everything in my power to take it back,” the Japanese businessman told us.

The outside directors – Makoto Takada and Atsunobu Ishida – had been nominated by Tomohiro, and had been installed thanks to an act of “deceit” by Tomohiro against his sister Hiromi, said the entrepreneur.

“She was tricked into nominating them, but has since changed her view and is supporting me,” said Kazuo Okada.

He further stated: “Ultimately I want my son to carry on my business. But it’s unfortunate that my son is not following the path I would wish him to. I don’t know why, but for reasons unknown to me, it seems Tomohiro is closer to Mr Fujimoto than me: either he [Tomohiro] is close to him [Mr Fujimoto] or he believes what he says… Hiromi is here with me and understands the situation.”

Kazuo Okada noted that “a son is a son, whatever happens between father and son”, but because the family was not currently working in concert, there had been an attempt at what amounts to a ‘palace revolution’.

The businessman appealed to his son to think carefully about whether his interests were really best served by siding with someone outside the family. “Tomohiro is one of the victims, like us,” said Kazuo Okada.

“Tomohiro should know that if this continues we already have a lot of deficit at the company [Universal Entertainment]. It is us, the Okadas, as [major] shareholders, that make a loss in that situation. Mr Fujimoto has nothing to lose but all to gain,” added the entrepreneur.

“If there is no good news for the public, the value of the company will keep going down,” said Kazuo Okada.

GGRAsia asked the entrepreneur what would motivate his son to oppose him, and whether the two had previously a good relationship.

“It was not so bad, but not so good,” he said. “Every family has unique problems in various situations,” he added.

The businessman’s daughter Hiromi also sat in on the interview. She said she believed the relationship with her brother had been “very good”. “I would like to tell my brother that family is the most important thing, no matter what,” she added.

Asked if she had tried to speak to him about the issue, she told us: “It’s hard to get this chance. We have always been close. We have never had big arguments before. But this incident has made a big argument. And there are so many interests involved… not just the family. Therefore there has been no contact whatsoever.”

GGRAsia raised with Kazuo Okada a number of controversies in his business career: his ousting from U.S. casino operator Wynn Resorts Ltd in 2012 after the Freeh Report – the content and findings of which he challenged in the U.S courts; additionally allegations – strongly denied by his side – of bribery of locals in relation to the Okada Manila project and the land associated with it; and allegations by the current management of Universal Entertainment – also fiercely denied – that he engaged in fraud amounting in value to millions of U.S. dollars.

We asked the entrepreneur if he understood why some people might have doubts about his probity.

He stated: “Maybe the common factor in these matters is this: if [business] partners don’t like me, they try to kick me out… by asking ‘reputable’ people to make a report – which is then publicised – to make me seem bad. It then looks like the other side is doing good, and I am doing wrong.”

He has already expressed on public record his anger at being frozen out of the US$2.6-billion settlement paid earlier this year by Wynn Resorts in relation to the 2012 cancellation of the Aruze USA Inc stake in the U.S. casino firm.

“I think it is easy for people to frame me. I am probably always betrayed by people, because for those people it is maybe easy to trick me,” said the businessman, adding that he has some weaknesses, including “easily trusting people”.

“Those people also know I don’t involve myself directly in controlling the money. So if the opponents can control the money, then they can control me,” said Kazuo Okada.

GGRAsia asked the entrepreneur if there was room for compromise in the present face-off between him and the current Universal Entertainment management.

He said: “Both sides cannot survive this struggle. What they did – particularly the current president of Universal Entertainment, Mr Fujimito – against my family is awful: beyond people’s imagination. It was to take over the company [Universal Entertainment] and to split the family… He [Fujimoto] did absolutely crazy stuff, using my family; with him [Fujimoto] benefiting; getting the highest position in the company, and surviving in that role. And it is I believe the sad truth that ultimately, it will be the company, the employees, the shareholders, that will be harmed.”

GGRAsia approached Japan’s Universal Entertainment seeking comment on Kazuo Okada’s comments regarding its president Mr Fujimoto, but had not received a response by the time this article went online.

We also asked Kazuo Okada what impact the battle might have on his chances of bidding for a casino licence in his home market of Japan, and on the licensing of his Aruze Gaming America Inc casino equipment business in the United States.

He added: “I have been wanting to do casino business in Japan after the Philippines. And of course these events have negatively affected that prospect, completely.”

Referring to the Nevada Gaming Control Board, he said: “Every time I am approached by Nevada I usually go to see them [in person] to explain the position. The last time was following the allegations stemming from Universal Entertainment. They [Nevada] are still investigating I think… I expect that following the investigation in Hong Kong, another request for information is likely to come soon from Nevada.”

A spokesman for the Nevada regulator confirmed in an emailed reply to GGRAsia on August 16 that the investigation into Kazuo Okada was ongoing.

GGRAsia asked Kazuo Okada what motivated him to pursue his struggle for control of Universal Entertainment. He said: “I have a belief that justice wins in the end.”

He added: “I have been accused by enemies; but people that know me, know these accusations are false. I believe in justice, and this belief drives me to continue. Therefore if you don’t give up, and continue to believe in the end you can always be successful, and can find justice.”

Macau’s casino gross gaming revenue (GGR) for the first five days of February is estimated at MOP1.9 billion (US$235.1 million) – or MOP380 million per day – a level that suggests a “45... END_OF_DOCUMENT_TOKEN_TO_BE_REPLACED