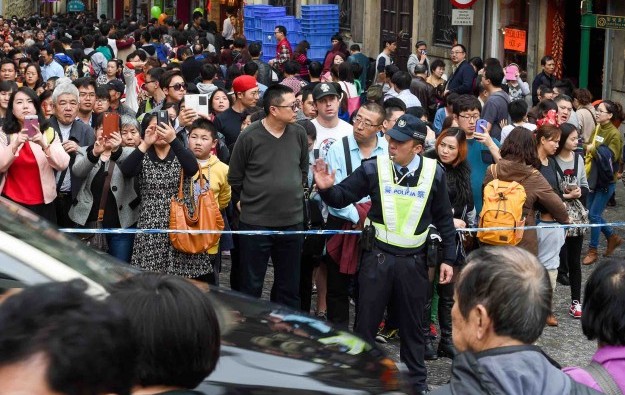 The number of visitors to Macau on October 4 – part of October’s so-called Golden Week holiday period in China – fell 20.3 percent from the equivalent date last year (which had been a Saturday), according to data issued on Monday by the Macau Government Tourist Office.

Sunday’s decline coincided with a Typhoon No.3 warning signal hoisted that day as Typhoon Mujigae skirted Macau, nonetheless bringing strong winds and torrential rain. The typhoon affected the schedule of Macau’s ferries and the departure and arrival of flights at the Macau International Airport, local media reported.

Many of Macau’s visitors – whether coming by sea or more commonly by land – are from neighbouring Guangdong province in mainland China, and many are able to make a decision at relatively short notice regarding whether they should visit, provided they have the necessary permit.

Macau’s Sunday tourist numbers were a sudden reversal of a positive year-on-year trend for aggregate daily visitors during the holiday, which officially started on Thursday, October 1, China’s National Day.

On October 1, total visitor arrivals were up 7.6 percent year-on-year, to 147,376, while the portion from mainland China rose 18.3 percent year-on-year, totalling 123,707, and thus representing 84 percent of that day’s visitor tally. The numbers, based on data from the Public Security Police, include arrivals by Macau non-resident workers and by students that are not Macau residents

The following day – Friday – the aggregate visitor numbers to Macau were up 18.3 percent year-on-year.

Sunday’s slump brought the aggregate year-on-year visitor improvement for the period October 1 to October 4 inclusive to 1.9 percent, or 632,008 arrivals, and for mainland visitor arrivals a year-on-year improvement of 7.8 percent during the four days, representing 540,922 arrivals.

Macau gaming stocks had experienced a rally on Friday and on Monday. Investment analysts suggested the rally was in likelihood supported by the improvement in visitor numbers at the start of Golden Week; but several added it might also be linked to comments by Li Gang, director of the Chinese government’s local liaison office. He had been reported as saying on Thursday that Beijing might boost support for Macau’s gaming market. No specific policies were mentioned in the local media reports.

Credit Suisse AG said in a note on October 1 that the Golden Week holiday “should be a good health check” for the Macau gaming market. Commenting on Mr Li’s reported remarks, analysts Kenneth Fong and Isis Wong said that “policy support from [the] central government should drive a better sector price performance”.

Local media reported that September market share for casino gross gaming revenue among the six Macau operators saw SJM Holdings Ltd return to top spot with 21.7 percent, despite that being a 20 basis points decline on the company’s August share.

Sands China Ltd was in second place in September with 21.3 percent, a 400 basis points decline on the prior month, while Galaxy Entertainment Group Ltd was in third spot, down 10 basis points sequentially, at 21.2 percent.

Macau’s GGR for September fell by 33 percent year-on-year to MOP17.13 billion (US$2.15 billion), according to official data.

Macau casino operator MGM China Holdings Ltd had a “record” market share in January, and its venues were the “highest-earning businesses” in the portfolio of the majority owner MGM Resorts... END_OF_DOCUMENT_TOKEN_TO_BE_REPLACED